But the city is still designing its streets for cars

Just off Seventh Street in Westlake, hundreds of elementary school students could be seen this week strolling freshly painted crosswalks, scooting past pastel planters made from tires, and sitting in colorful polka-dotted plazas set with yellow chairs and clusters of umbrellas. They were testing what should be LA’s street of the future.

Little Street is the latest project of the city’s Safe Routes to Schools, a program where “neighborhood-friendly streets” are being designed for 50 local schools. Over the last few years, the team has worked closely with students, faculty members, and parents to find out what will make families getting to school feel safer and more comfortable. This has meant adding kid-friendly bike lanes, widening sidewalks, and even closing parts of streets to cars. Testing the changes temporarily allows planners, engineers, and traffic safety officials to get feedback from families and tweak the designs before they’re implemented.

“This is really pioneering for the department,” says Safe Routes to Schools director Margot Ocañas. “It’s something that we’re hoping to scale.”

As illustrated by the families making their way to school along Little Street, walking transcends age, abilities, and income levels. It’s the one transportation mode that requires no fare pass, no down payment, no special equipment. Walking—and when I say walk, I also mean navigating the city using wheelchairs, strollers, and other mobility devices—is something that everyone does, every time they move around LA, even if part of that journey is in a car.

Walking is also the best way for LA to climate-proof its streets. As part of LA’s Green New Deal plan to eliminate emissions, 50 percent of all trips must be made by walking, biking, and transit by 2035. Yes, we need more trains, dedicated lanes for buses, and safer places to ride bikes and whatever shared mobility devices we’ll be riding in the future. But investing in walking is the most crucial investment a city can make to get people where they need to go, including onto those bikes, scooters, buses, and trains.

In 2018, walking, biking, and transit only made up 14 percent of LA’s trips, according to city estimates. Yet one-third of all vehicle trips are two miles or less, which means many of those shorter trips—to school, to the store, to a restaurant, to the park—could be easily made on foot. Building more housing in job-rich, amenity-rich areas means more of those places might be located closer together. When it comes to reducing emissions, this is what’s holding the city back.

According to a November report from the state’s Air Resources Board, every region in the state missed its emissions targets in 2018 because Californians are driving more.

“California will not achieve the necessary greenhouse gas emissions reductions to meet mandates for 2030 and beyond without significant changes to how communities and transportation systems are planned, funded and built,” the report says.

This sounds like an emergency, right? I haven’t even mentioned the 240 people killed traffic collisions in Los Angeles last year. So why isn’t LA taking more drastic measures to make the city more walkable?

Around the world, a movement known as walk-first cities has been embraced by places that have successfully shifted more trips to walking. Much like the way that cities spent decades designing for cars, walk-first cities work to build pedestrian-focused networks, creating accessible walking routes between destinations that are shorter, safer, and more welcoming than those made for drivers.

The key to a walk-first city is to dictate universal infrastructural changes, according to Jemilah Magnusson, global communications director for the Institute for Transportation and Development Policy. “It shouldn’t be just one street, it should be the whole city,” she says.

Right now, LA has one “complete street,” Figueroa Street from Downtown to USC, which was originally designed to prioritize the movement of pedestrians. But over 10 years, the $20 million project was watered down, and the street remains car-centric.

A city-funded Complete Streets program was announced last year with the goal of overhauling six more streets to serve as models for how LA could better implement street reconstructions in the future. Yet, just days after his climate plan dropped, Mayor Eric Garcetti’s budget was released, recommending cutting the funding for the Complete Streets program by $10 million.

That would reduce the number of Complete Streets projects being proposed, and provide no additional funding in the budget for sidewalk repair. Instead, a new program, called the Failed Street Reconstruction Program, will get $25.1 million.

“It’s hard to reconcile the disconnect between the rhetoric for building our cities for the future, when we see a brand-new funding program that puts people driving cars and the status quo first—and leaves everyone else left behind,” says Jessica Meaney, executive director of Investing in Place. “This budget has reduced funding for complete streets and community engagement which doesn’t align with the goals or come close to funding the implementation of the mayor’s sustainability plan—or the Green New Deal.”

Los Angeles has the money to make these changes. The city has never had more money for transportation improvements. The funds from Measure M and Senate Bill 1 alone equal at least $2 billion dollars for regional transportation projects annually. Yet some Measure M and SB 1 money is still being used to widen roads for cars. 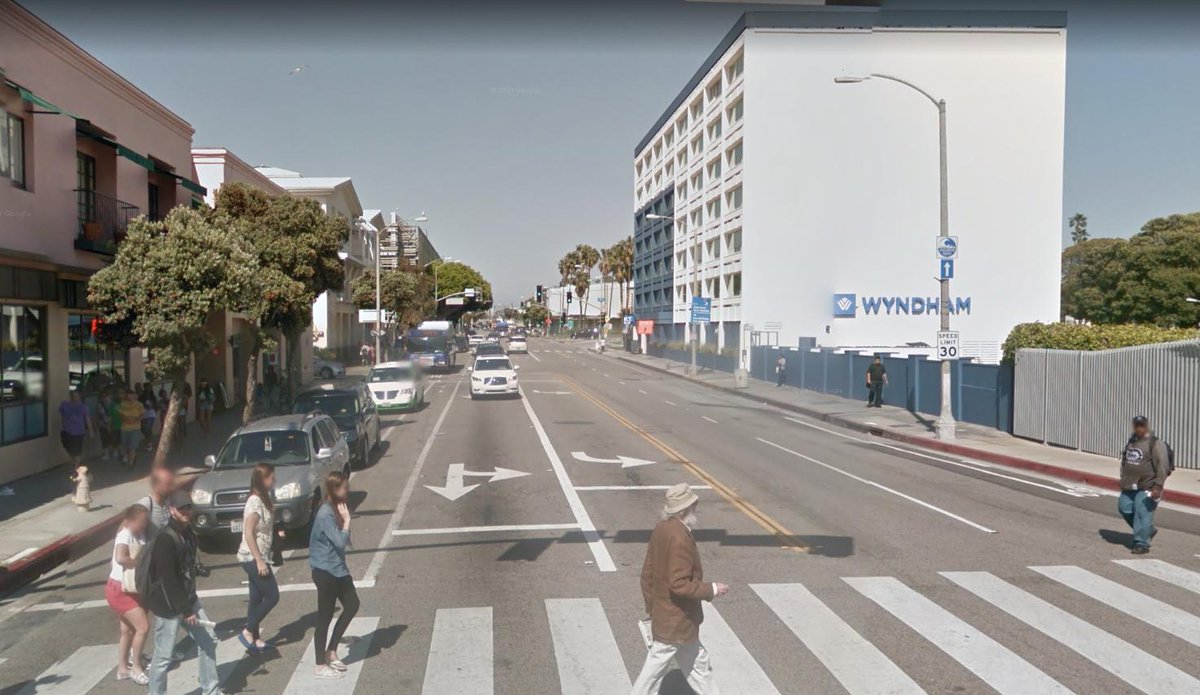 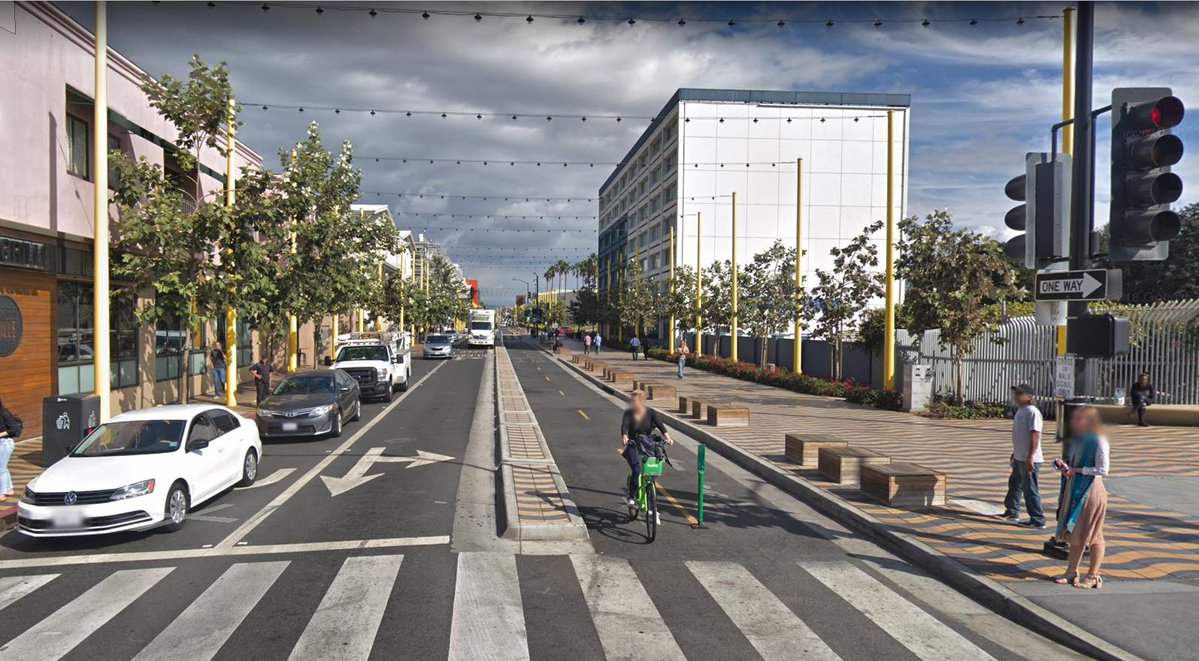 Los Angeles has long been a member of C40, an international coalition of cities which work together on collective actions to reduce emissions. So when Garcetti says, “Our plan gives every other city in the country and the world a ‘greenprint’ to follow our lead,” he must know that’s not true. Most of the cities in the coalition are years, if not decades, ahead of Los Angeles. They are implementing congestion pricing, building out bike networks, and making streets car-free.

Many large U.S. cities have made sweeping walk-first proposals just in the last few weeks. Washington D.C. has introduced legislation that would ensure any street or sidewalk reconstruction prioritizes pedestrians. New York City introduced a similar bill that would make implementing pedestrian safety infrastructure mandatory citywide. Denver and Kansas City are moving forward with makeovers of their downtown streets, including replacing street parking and vehicular lanes with places to walk.

And through the National Association of City Transportation Officials, Atlanta, Philadelphia, Denver, Boston, and Minneapolis will each complete a major walking, biking or transit project that shows “measurable emissions reductions”—within the next 18 months.

The most frustrating part about LA’s climate plan is that these goals wouldn’t be necessary if the city had followed through on its existing plan to reduce LA’s reliance on cars. In 2015, the City Council approved the Mobility Plan 2035, a collaboration between the city’s transportation and planning departments, that contained strategies to reduce greenhouse gas emissions.

One of these strategies was overlaying the city with a series of car-free networks, including dedicated bus lanes and protected bike lanes. It also included new pedestrian-focused street design standards meant to connect a series of walkable, pedestrian-enhanced districts throughout the city.

“All implementation measures needed to achieve that level of reduction are in Mobility Plan 2035,” says Juan Matute, deputy director of the UCLA Institute of Transportation Studies.

But without the Mobility Plan, or the Complete Streets program, what strategy does the city have to efficiently reduce emissions on its streets?

Even the city’s sidewalk repair program is not necessarily making walking safer, more welcoming, or more convenient. It’s almost exclusively focused on the bare minimum of accessibility compliance: replacing broken pavement, installing ADA ramps, and in some cases, removing trees. Accessibility is critically important. But just fixing a broken sidewalk does not make a walk-first street.

To reduce LA’s reliance on fossil fuels, every single street will need to change dramatically. In the future, not “wanting” a road diet won’t be an option.

Street reconstruction is a once-in-a-generation occurrence in this city, and the changes being made to our streets will determine how they are used for decades.

LA’s Green New Deal calls on Angelenos to “drive six fewer miles” by 2050, but those figures are actually dependent on aggressive electric vehicle adoption. So it’s not just driving less or shifting half of LA’s trips away from cars, it’s also requiring that 80 percent of those cars are electric by 2030, and 100 percent by 2050. Considering that less than 2 percent of LA’s cars are electric right now, those are incredibly ambitious targets—unless LA starts reprioritizing its transportation investments right now.

But there’s another reason why we need to redesign our city for walking. If the city’s goal is for all vehicles to be electric by 2050, it is essentially setting a deadline for people who don’t have access to reliable walking, biking, and transit infrastructure to purchase a new electric car (or sign up for electric ride-hailing services). That will only exacerbate the existing inequity created by a century of driving, storing, and maintaining cars, which already makes LA’s housing pricier, commutes longer, and neighborhoods more fragmented.

To reduce LA’s reliance on fossil fuels, every single street will need to change dramatically, whether it’s by carving out dedicated bike lanes, installing electric vehicle chargers, or planting trees instead of street parking. In the future, not “wanting” a road diet won’t be an option. Investing in the people who are already using zero-emission transportation is the only truly zero-emission transportation solution—and it’s the only way LA can guarantee it can meet its climate goals.

By 2035, LA needs a network of safe, shaded, well-lit right-of-ways connecting people, parks, and transit throughout the city—a freeway system for people on foot. Greenways, parkways, promenades, esplanades, dotted with comfortable seats, native plants, and sidewalk vendors on every block. In other words, Little Streets everywhere.

Where to walk in LA during the pandemic

Should LA close streets to cars to give walkers more room?

View all stories in Pedestrians