The report spells out four options for a new transit line in the Valley, including bus, light rail, and tram

Metro has released a draft of its environmental report for what the agency calls the East San Fernando Valley Transit Corridor, a high capacity transit line that will be built over the next decade between the Van Nuys Orange Line station and the Sylmar/San Fernando Metrolink station.

The report singles out more traffic congestion in the near future as the of main reason the corridor needs significant transit investment, and it underscores the crucial need for developing better transportation options in the San Fernando Valley.

Van Nuys Boulevard is already one of the most heavily used bus corridors in Los Angeles, second in the Valley only to the popular Orange Line. As the number of people living and working near Van Nuys Boulevard and San Fernando Road continues to grow, Metro anticipates traffic on the roads will worsen. Along with inconveniencing motorists, traffic slows the pace of buses to a crawl.

Also important is how the line will connect to future Valley transit projects, including the Sepulveda Pass project set to open its first phase around 2026, and the North San Fernando Valley Bus Rapid project that’s scheduled to arrive around 2023. The city of Los Angeles’ Mobility Plan 2035 also envisions restriping many of the Valley’s streets to give more priority to buses and bikes, all of which will help people get around America’s Suburb without driving.

Paid for by money from voter approved Measures R and M, and Metro wants to begin construction on the Valley line in 2021. The agency’s target to open the line is 2027.

Below, we detail four options Metro is considering to guide its the Valley’s latest growth spurt. 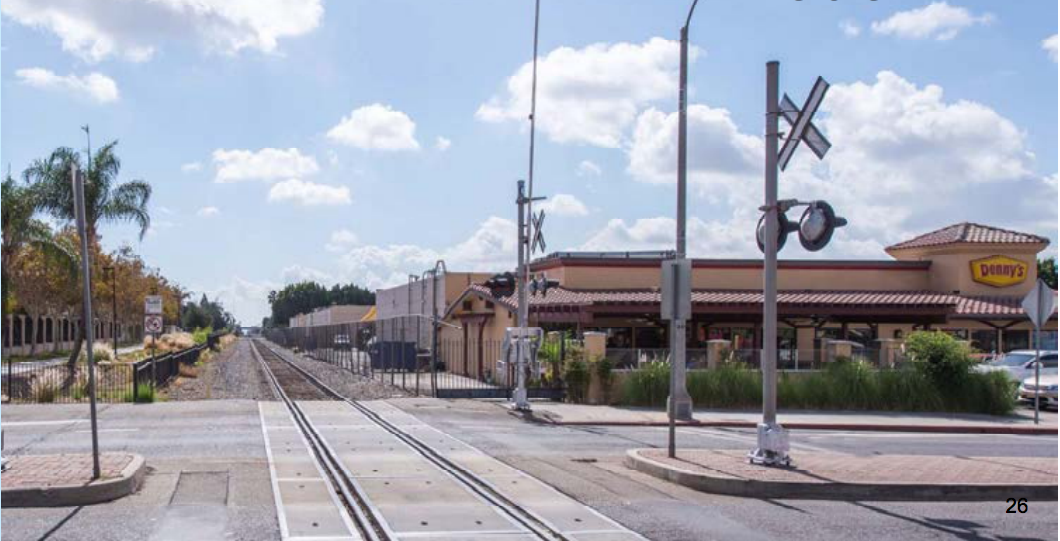 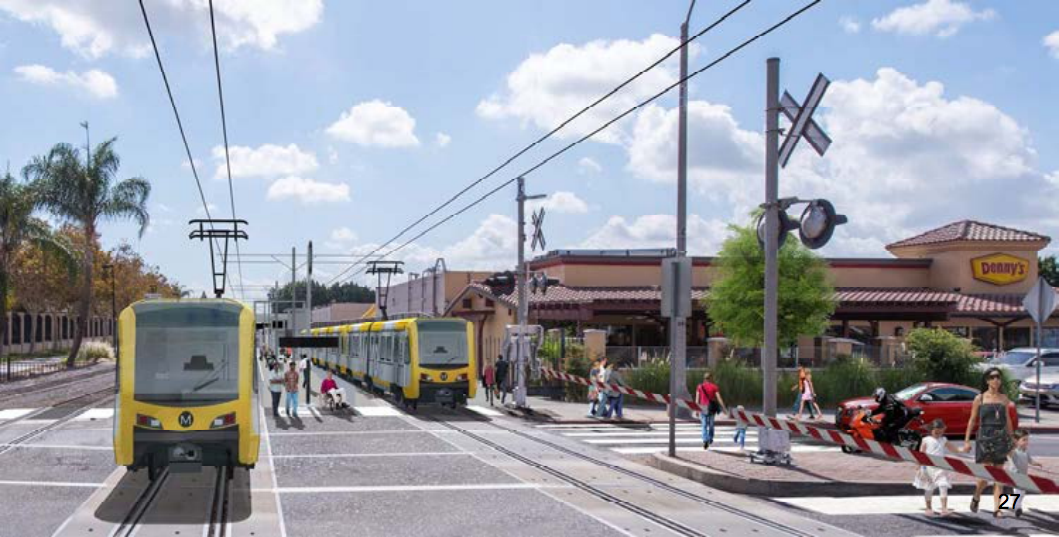 Before and after comparison of what light rail would look like at McClay Avenue in the city of San Fernando.
Via Metro

The sexiest of the four choices is the 9.2-mile, 14-station light rail line. With an anticipated 29 minute end-to-end travel time, the light rail line, like the Expo or Gold Lines, would easily provide the the fastest trip for the most number of passengers of all the studied options. Most of the route would run in the middle of Van Nuys Boulevard, save a 2.5-mile section between Panorama City and Van Nuys that would be underground. The northern portion of the route would run on the side of San Fernando Road, along an existing rail-right-of-way. Stations would be placed at most major intersections along the route.

A high-capacity train on the corridor would also be the most friendly to future ridership growth. As studied, a single LRT could carry up to 400 passengers per train, more than five times the 75 passengers per rapid bus. To see the Valley’s demand for good transit, look no further than the Orange Line’s packed rush-hour buses.

Anticipating future growth is critical, particularly along this already heavily-used corridor. Metro anticipates the rail line could carry up to 47,400 passengers by 2040.

On the flip side, building the light rail is more expensive than the other studied transit options, partially because it requires the purchase of land for a train-maintenance facility. Metro’s cost estimate to build the train line runs about $1.4 billion more than the $1.33 billion currently allocated for the project from Measure R and Measure M funds. Metro stresses, however, that it could “reconfigure” the rail line to cost less.

Before and after showing what a median-running BRT would look like at the Metro Orange Line Station.
Via Metro

The median rapid bus would involve converting the median of Van Nuys Boulevard into a bus-only right-of-way and adding about 2.5 miles of “mixed-flow” bus service along San Fernando Road. End-to-end travel on the 17-station route would take about 37 minutes. Buses would run once every 12 minutes, except during peak hours when they would run once every six minutes.

Metro estimates that building a median running bus rapid transit (BRT) line would cost about $402 million, far less than the light rail train for a similar level of service. On one hand, the median rapid bus could be built more quickly and inexpensively in comparison with light rail. However, it would ultimately be able to carry fewer passengers at a lower speed than a light rail train, particularly along the northern portion of the route where it would flow with street-traffic. A north-south Valley BRT system could potentially hit similar capacity issues to the east-west Orange Line. For what it’s worth, Metro is considering converting the Orange Line into a rail line at some point in the 2050s. 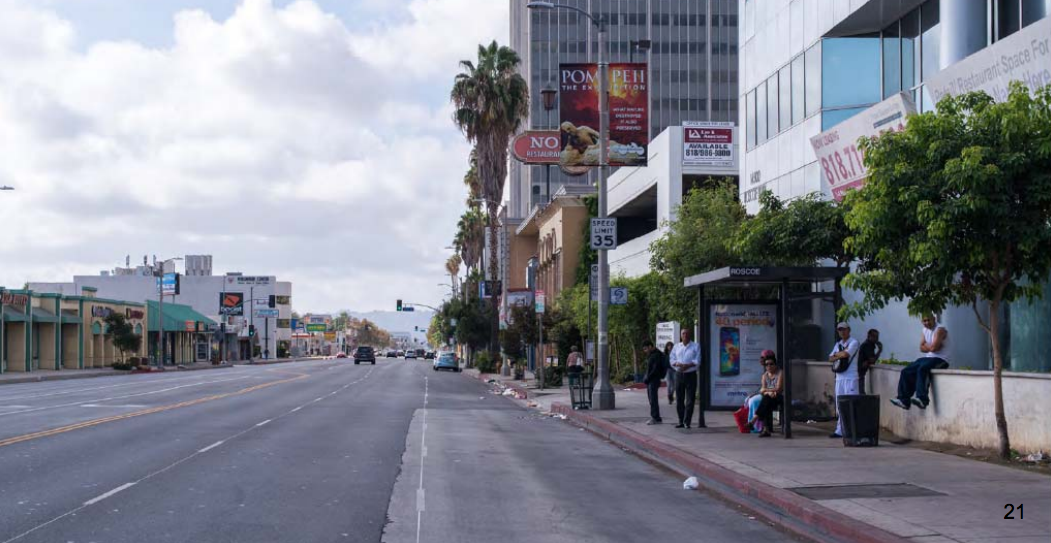 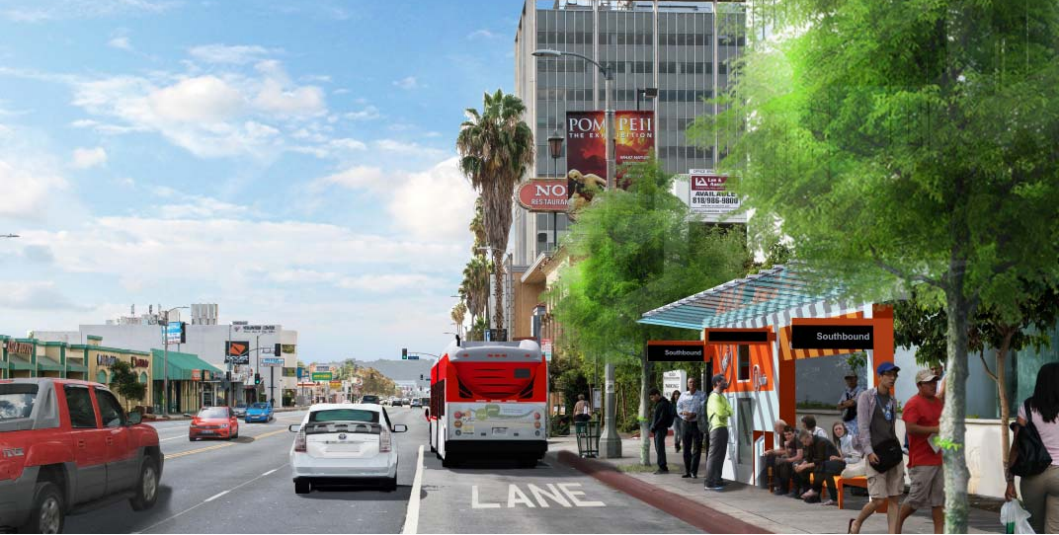 Before and after showing what curb running BRT would look like at the Van Nuys and Roscoe intersection in Panorama City.
Via Metro and Via Metro

The curbside rapid bus option would look most like the Wilshire Boulevard bus lanes. Where 6.7 miles of the route would flow in bus-only lanes striped down Van Nuys Boulevard, the 2.5 miles on San Fernando Road would remain subject to the ordinary flow of traffic. Though bus-only lanes would prohibit vehicles from traveling in, buses could potentially be slowed by cars still allowed to filter into the lanes for right-hand turns.

The curbside option would have 18 stations instead of 17, and end-to-end travel time on the curbside rapid bus would be about 41 minutes. Metro anticipates this option would cost $294 million.

Though the it’s clear the curbside rapid bus would provide a more limited level-of-service than some of the other options, it would be dramatically less expensive and easier to build than other choices. It would be interesting to see if Metro considers using this option as a stepping stone, while the agency sniffs out extra funding for a rail option that will inevitably connect one day to the Sepulveda Pass project. 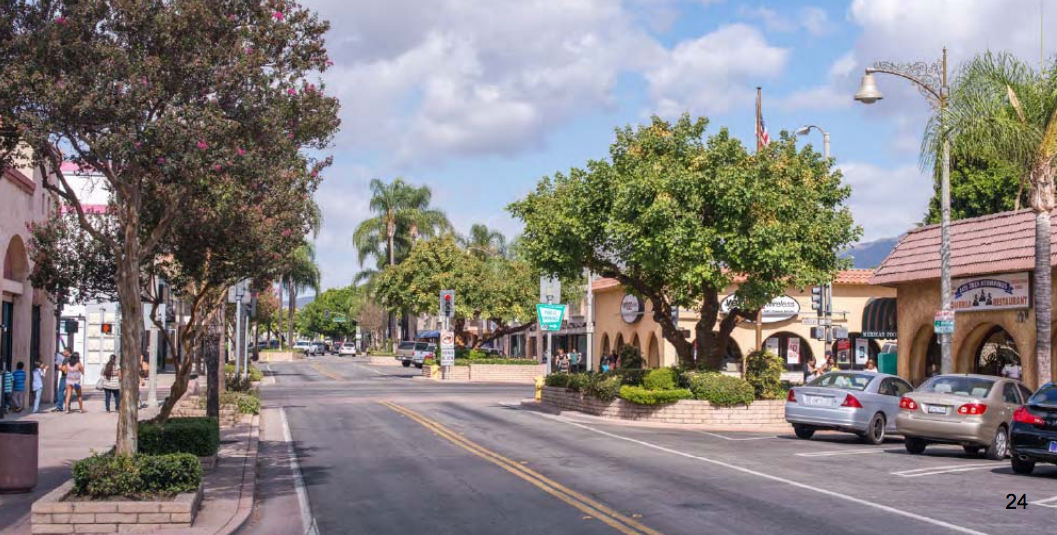 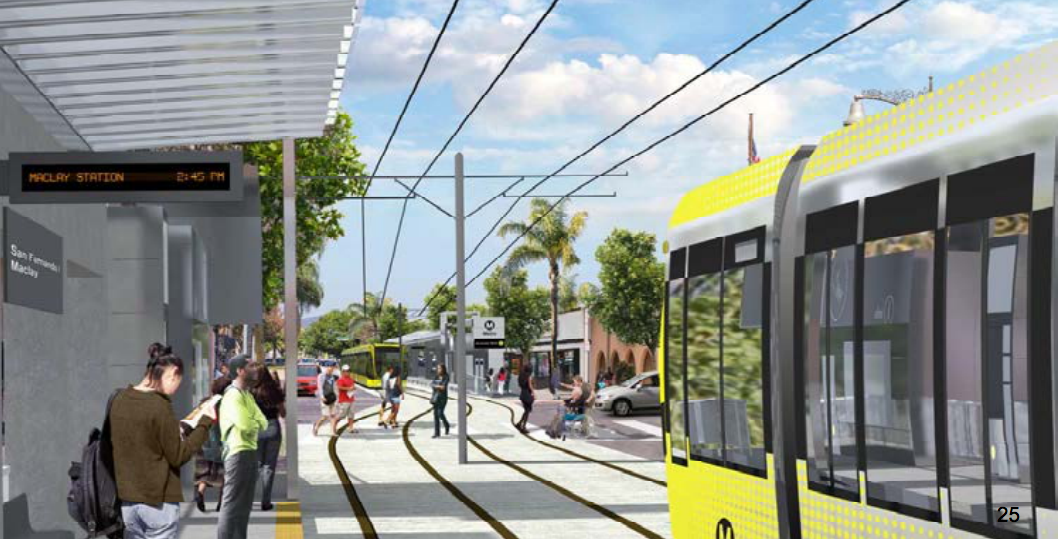 Before and after showing what a tram would look like at the intersection of San Fernando and Maclay.
Via Metro and Via Metro

Also on the list of options is what’s called a “low floor light rail” train, also known as a tram or streetcar. Acting as a sort-of hybrid between the regular light rail train and the median rapid bus options, the tram would flow along the median of Van Nuys Boulevard, and in traffic along San Fernando Road. There would also be many more stations than the light rail and bus rapid transit options—28 in total—as Metro would seek to consolidate nearly all existing bus service along the corridor to the tram.

Metro estimates an end-to-end trip on the tram would take 42 minutes, making it the slowest of the options. Its $1.3 billion price tag is also significantly higher than either of the rapid bus options, though still quite a bit less costly than the light-rail option. The tram would also require the purchase of additional land for a maintenance facility.

Other things to consider

The environmental report includes six options. Along with the four detailed above, Metro also studied a “No-Build” and “Transportation System Management” options which, as the Source notes, Metro is legally required to study. Neither option would provide much benefit for local and regional mobility.

Also critical is the fact that all of the four options listed above would remove bike lanes and existing street parking from Van Nuys Boulevard in many spots. This would conflict with the city of Los Angeles’ master bike-plan, which plans for bike lanes along most of Van Nuys Boulevard, many of which have already been striped.

Metro will hold five public meetings as a part of the environmental report’s public input and review period, ending October 16. Simultaneous translation in Spanish will also be available. Here’s the schedule of public meetings:

Next Up In Metro Los Angeles