Hollywood before and after photos: From rural paradise to tourist trap

Once filled with mansions and gardens

Before it was the concrete and stone mecca of disoriented tourists and chipped Walk of Fame stars, of incessant traffic and towering condos, Hollywood was a charming, tight-knit village.

It was a short lived Camelot, quickly paved away by the march of progress, but lucky for us—photos still remain—if not much else.

Join us as we take a photo tour of the Hollywood of yesterday—and what stands in its place today. 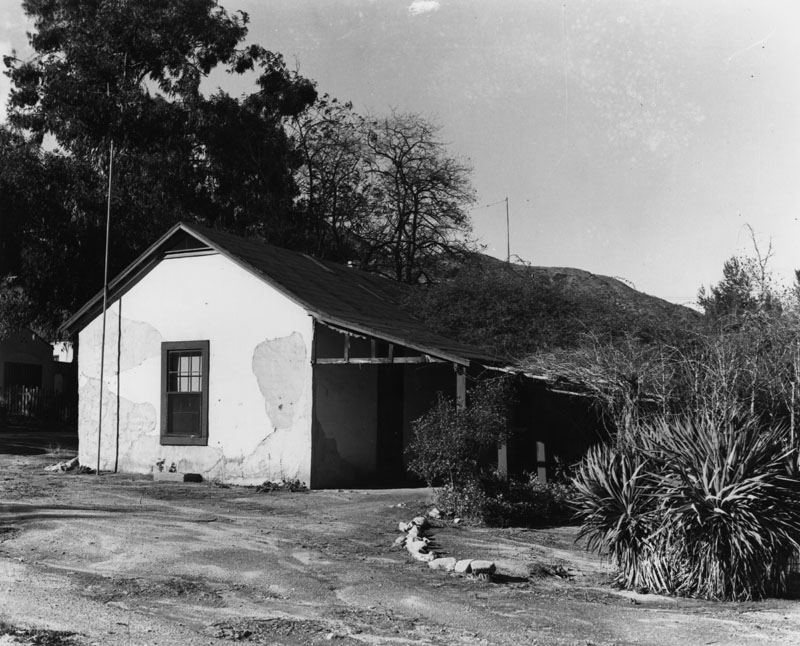 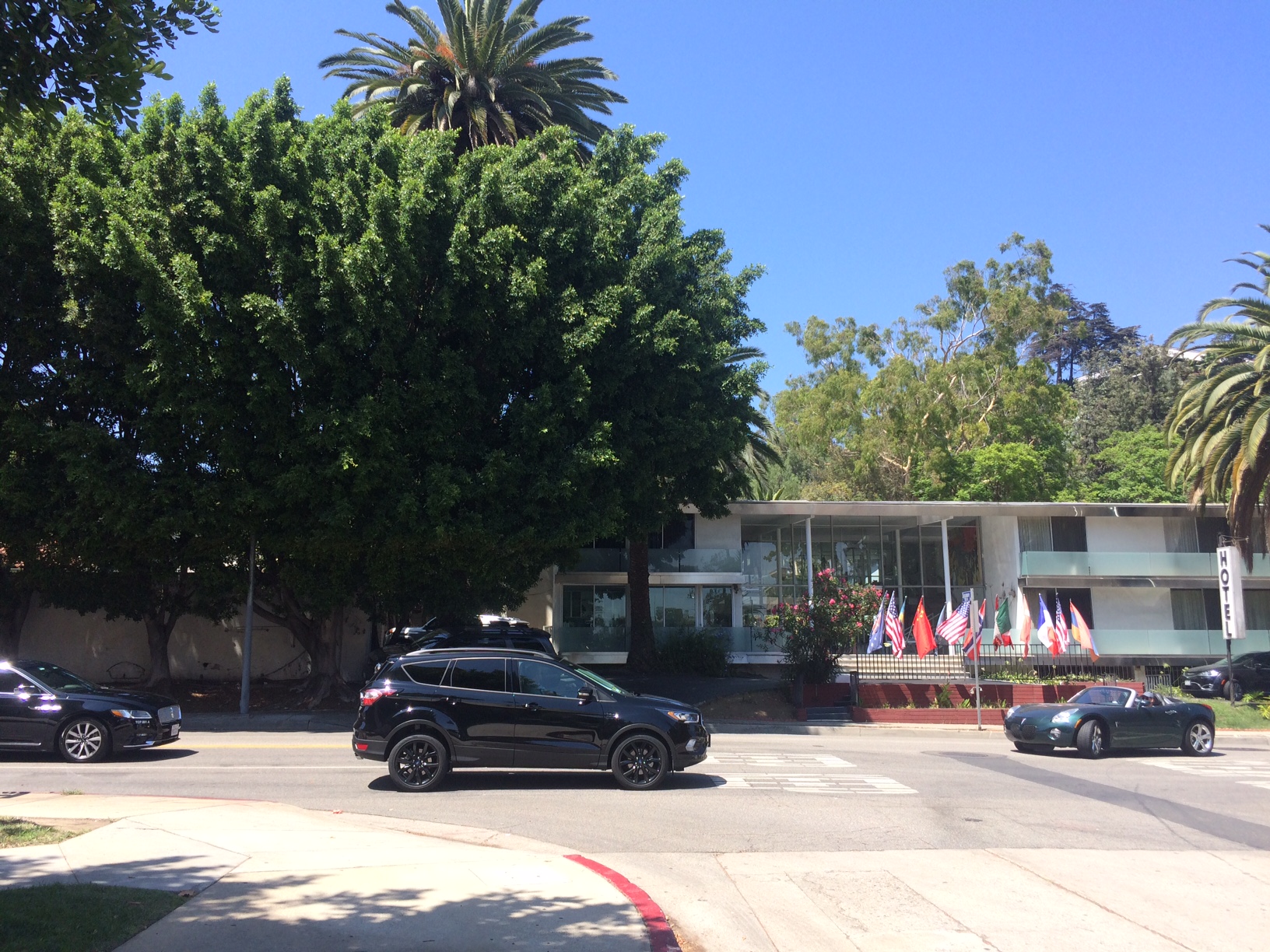 Californio Tomas Urquidez built this simple adobe among a clutch of sycamores at what is now Franklin Avenue and Outpost Drive around 1854.

According to historian Gregory Paul Williams, author the masterful The Story of Hollywood: “As other houses appeared in the valley, Casa Don Tomas remained the most fashionable and largest in the valley. It was a social center for the Californios of the neighborhood. They staged their traditional fiestas, rodeos, and Los Pastores Christmas celebrations here.”

The adobe later became part of the Outpost, the famed rustic retreat of Los Angeles Times publisher Harrison Gray Otis. The adobe was torn down in the 1920s. 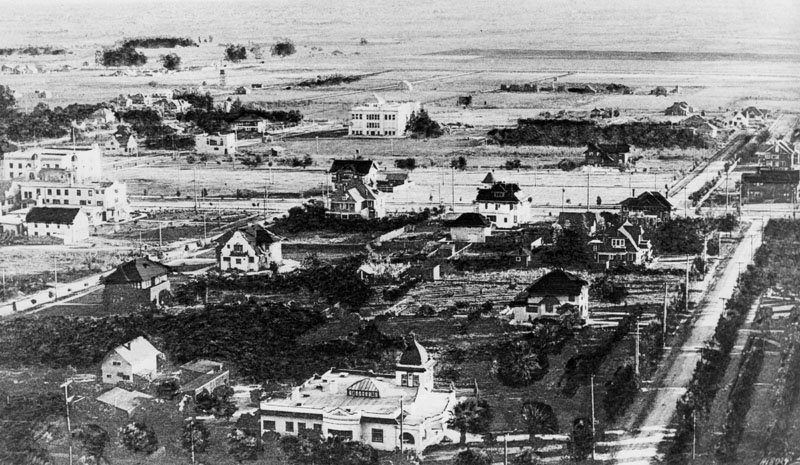 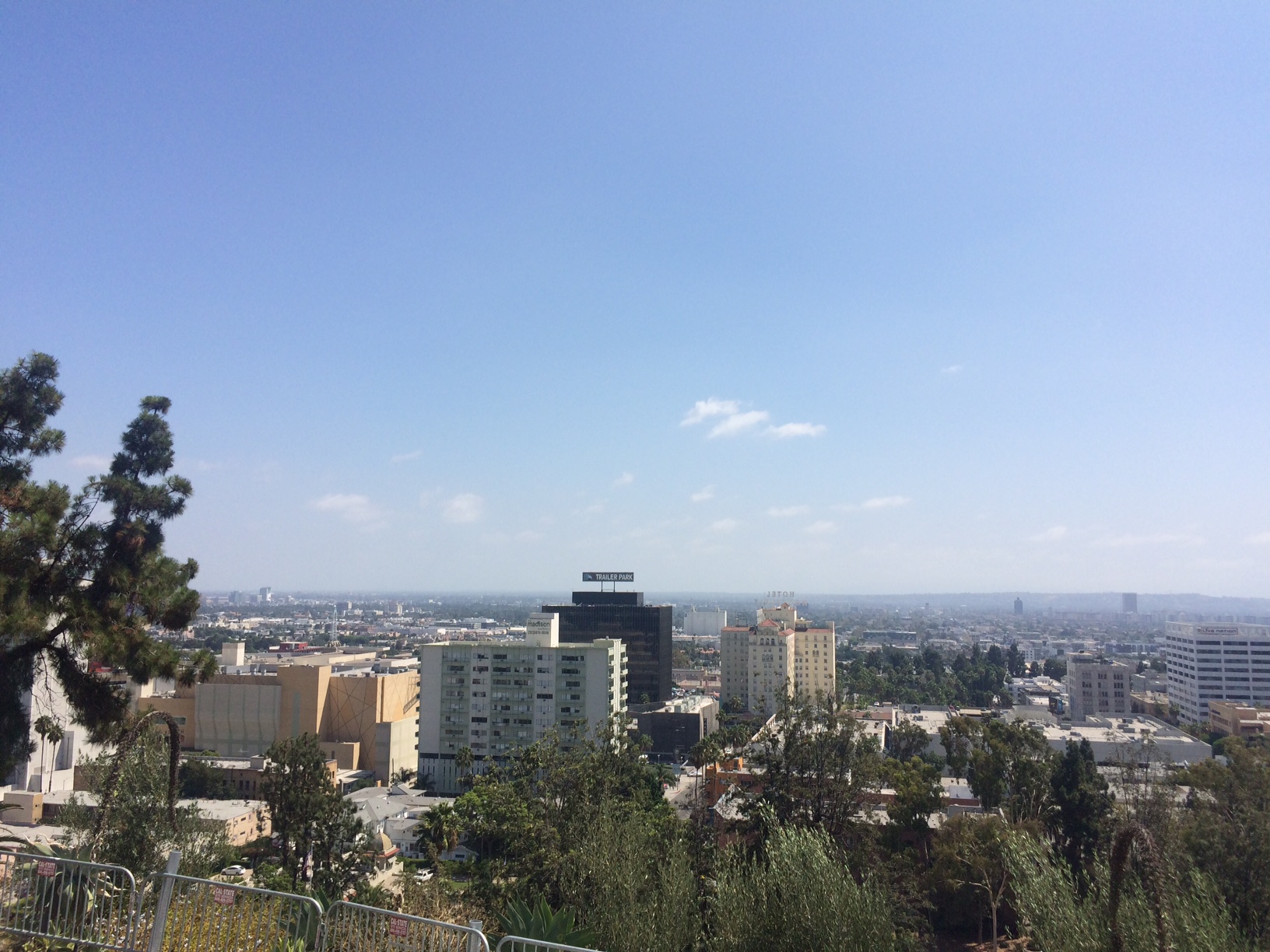 By the turn of the century Wilcox’s "dream of beauty" was a reality. Hollywood was a prosperous enclave of 500 people. A woman who grew up in Hollywood during this time remembered a "country life," where children ran through lemon, orange, and tomato fields and made snowmen during the rare snow of 1905. 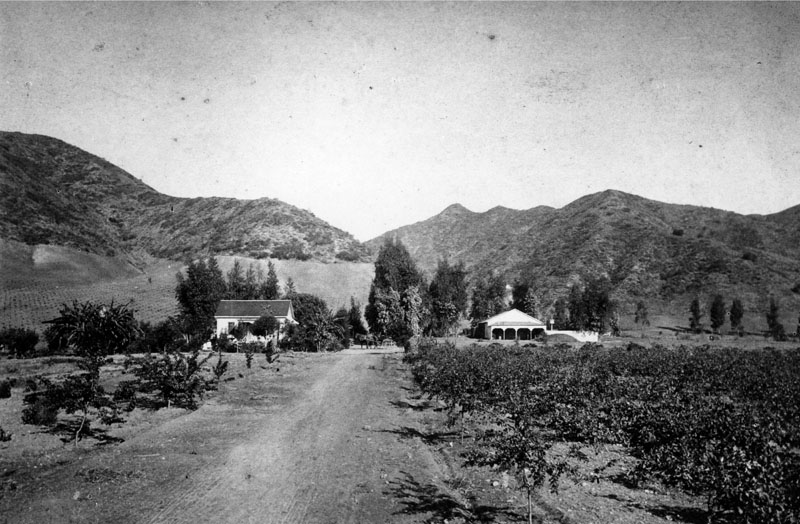 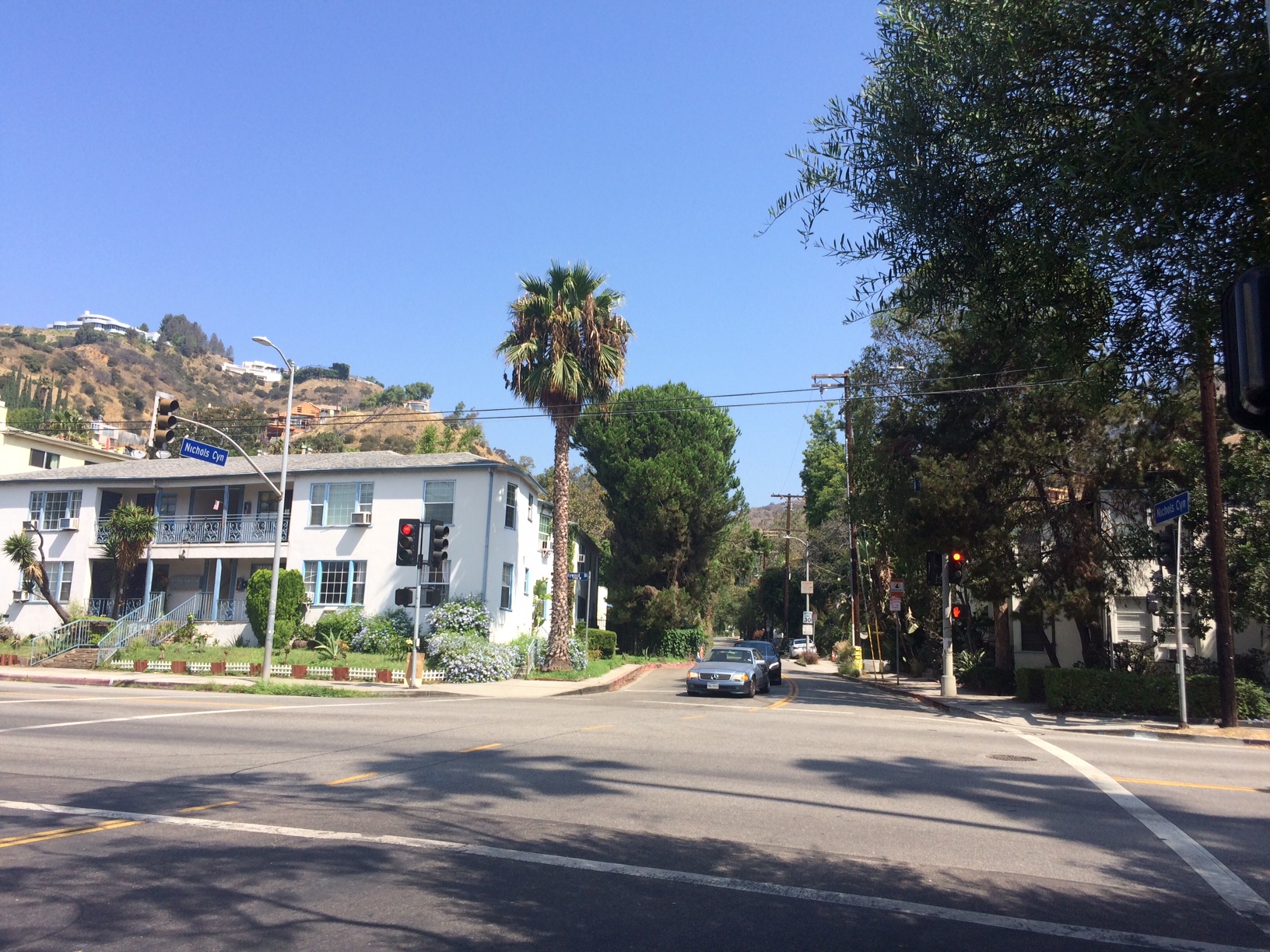 In 1879, the Jacob Miller family moved to their 70-acre ranch near Hollywood Blvd., in the foothills of Nichols Canyon. Here, the Miller’s planted the first orange trees, avocados, and cherimoyas in the Hollywood.

“Of course, we had many hardships,” Mrs. Miller told the Times decades later, “not the least of which was having to drive through dust in summer and mud in winter to the hamlet of Los Angeles for our mail and supplies. There was nothing where Hollywood is now except a small ranch-house. But we loved the hills and our beautiful canyon, and we’re happy in our home and family.” 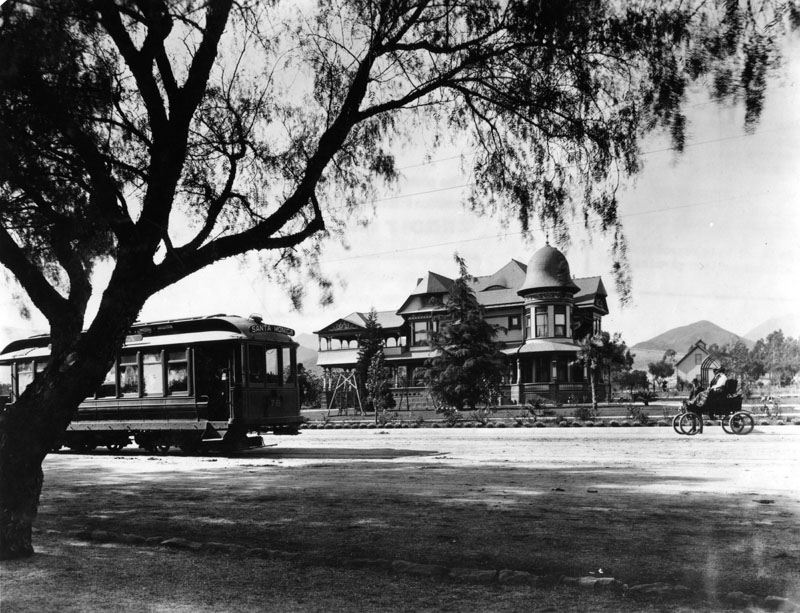 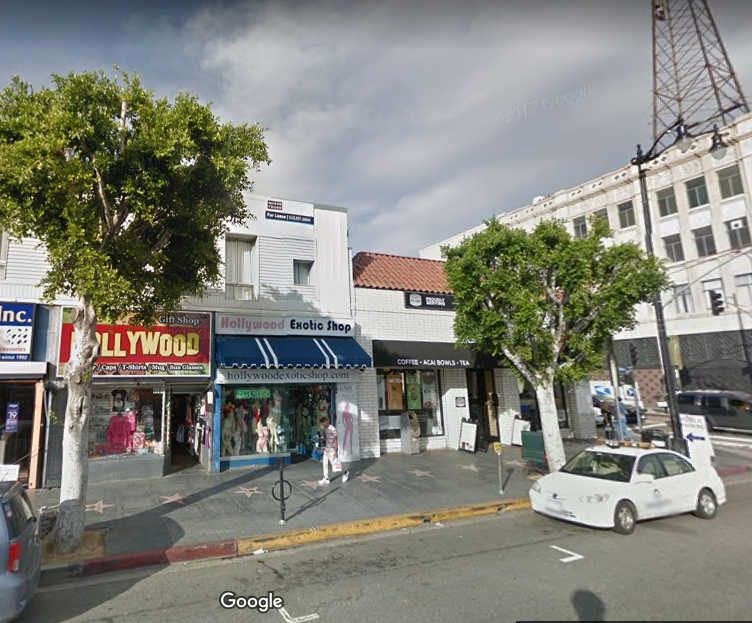 Owned by a miner named E.C. Hurd, originally from Colorado, this large Victorian home at Hollywood and Wilcox was surrounded by lovely gardens, typical of Hollywood at the time. 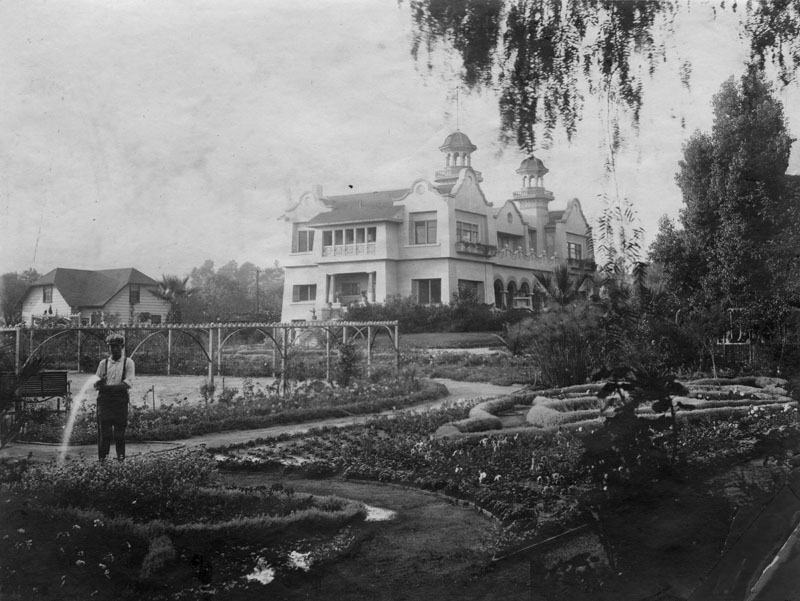 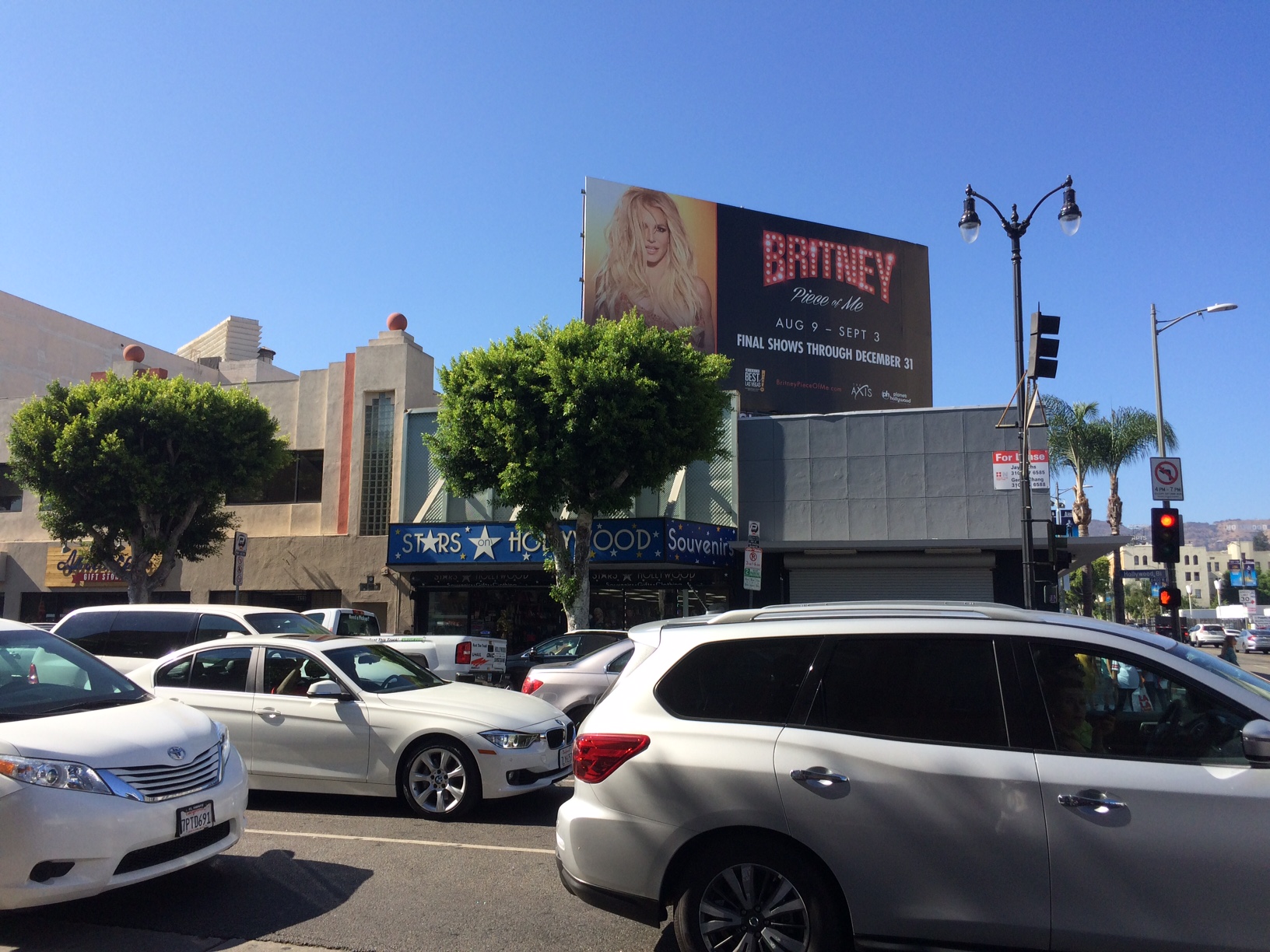 French still-life painter Paul De Longpre’s flower-strewn estate was the undisputed showcase of the village of Hollywood, and the city’s first tourist trap.

“Paul de Longpre's estate had a Cahuenga address, and was located on the lots at Hollywood and Cahuenga, on the North-West corner,” Walk Old Hollywood tour guide April Clemmer says. “He built an estate and the additional two lots were for his flower gardens, as he was a French watercolor artist. Visitors could purchase a ticket, or visit the estate as the first stop of the Balloon Route tour that started downtown and went out to the beach communities and back. Visitors could tour the gardens and the interior of the home, and watch de Longpre paint.” The home was torn down in 1927. 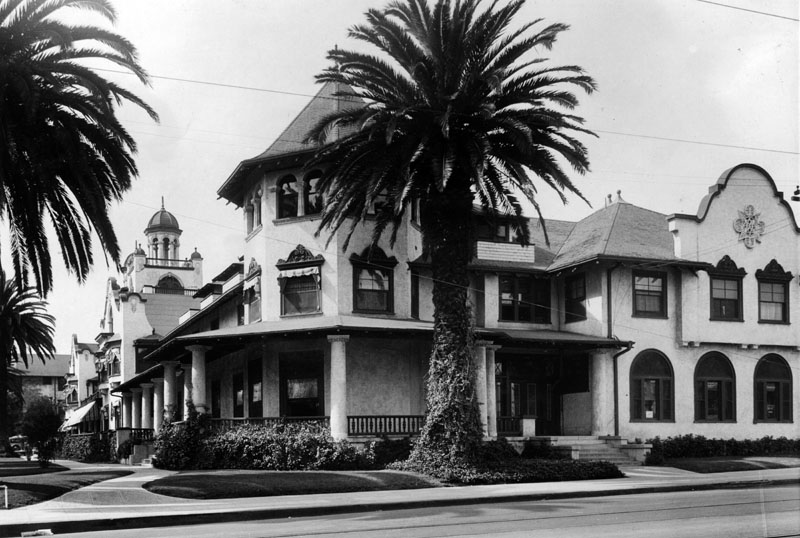 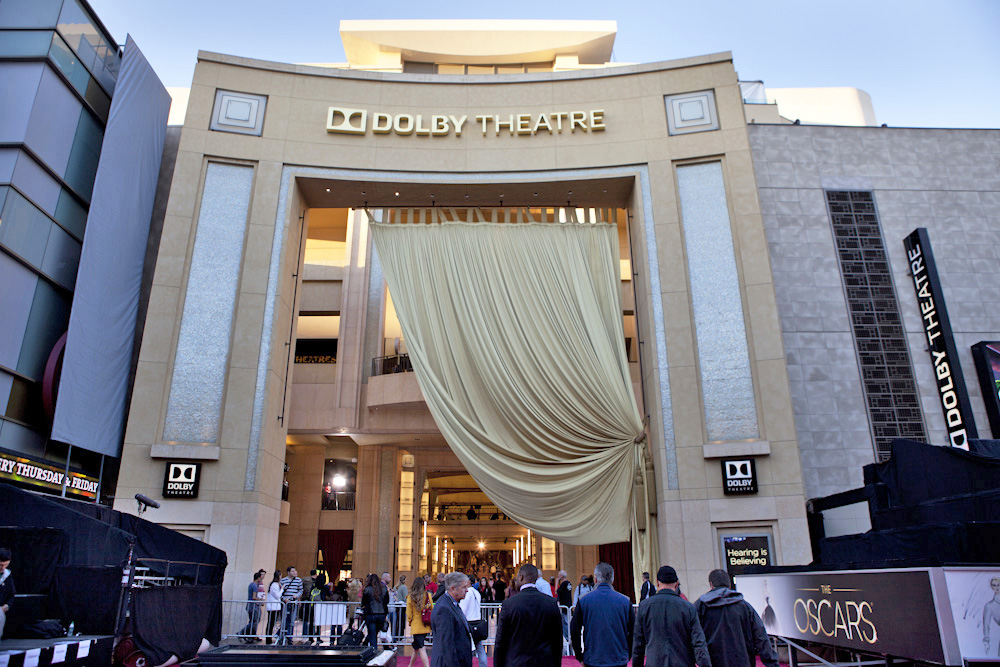 This legendary hotel was located at the corner of Hollywood and Highland. Built in 1902 by developer H.J. Whitley, it would grow into a rambling, white behemoth, which would be the first Hollywood home of many early silent film stars.

The hotel was run for many years by the formidable and eccentric Myra Hershey, who acted as a strict den mother to silent stars like Norma Shearer, the Talmadge sister and John Gilbert. At the hotel’s famous dances, Hershey tried in vain to keep everything above board.

“The thirsty thespians at these socials stayed well lubricated in no-drinking Hollywood,” Williams writes. “While a string quartet of lady musicians played refined selections, actors sashayed among the more arthritic hotel guests as Miss Hershey shoved amorous couples apart on the dance floor, ordering them off if they got too lewd. Anita Loos wrote that everyone laughed behind Hershey's back when she admired two young ladies so much for dancing together—they were lesbians.” The hotel was demolished in 1957. 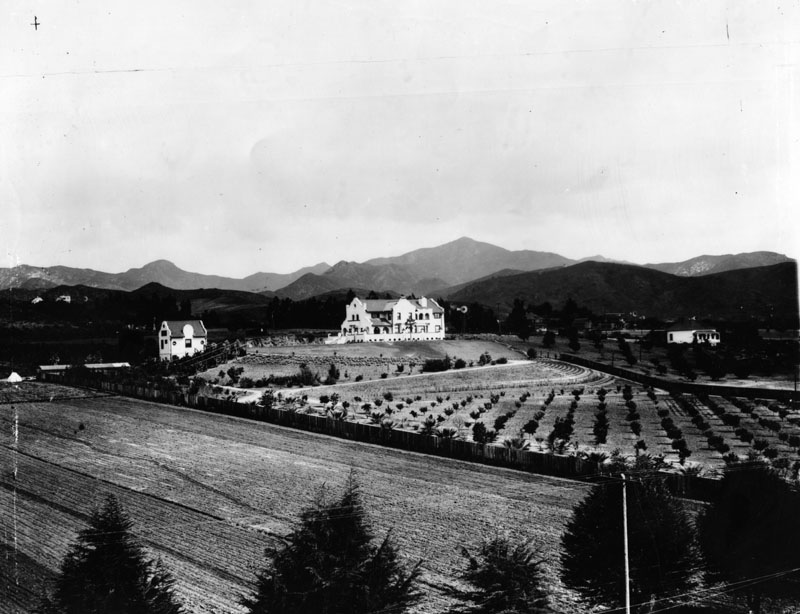 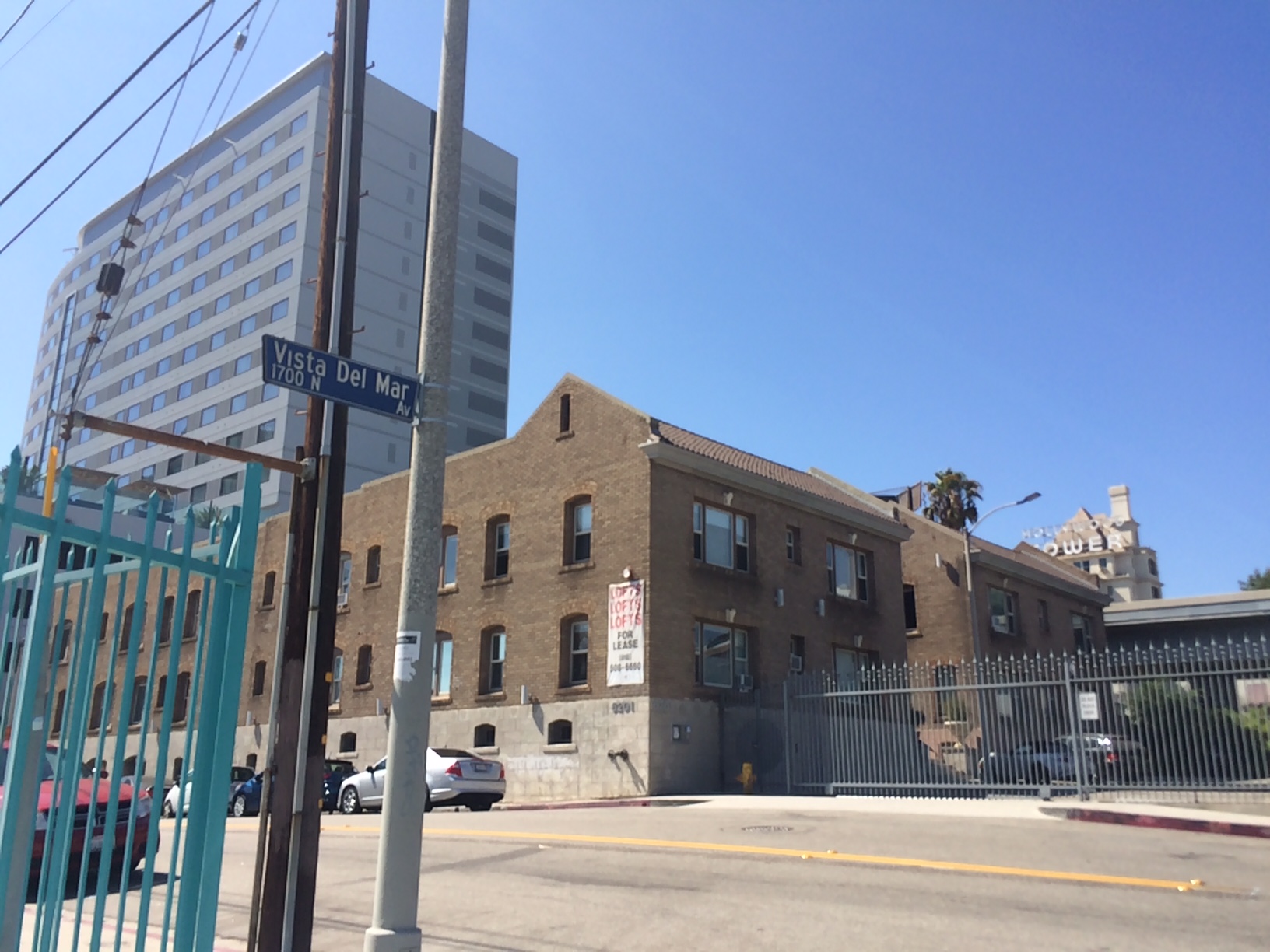 This grand estate at Hollywood and Argyle was built by Englishman Albert Griffith Bartlett, who owned a popular sheet music store in Downtown Los Angeles. It sat at the peak of Jose Mascarel’s Vista Del Mar tract, which opened for subdivision in 1901.

“Many considered the fifteen-thousand-square foot Bartlett home one of the finest the era,” Williams writes. “About 300 guests from Los Angeles and Hollywood assembled at Vista Del Mar, the palatial home of Honorable A.G. Bartlett and his wife last night, in honor of their daughter Bessie ... The parlors, library and music room were tastefully decorated with roses and carnations, and when thrown together formed an ideal place for the entertainment of so large a number.”

The estate was also used by the government as an agricultural experimental station, and many rare and exotic trees and flowers were planted. The seven-acre tract was sold in 1927 for over $1 million, “the highest priced subdivision ever recorded in Los Angeles.” 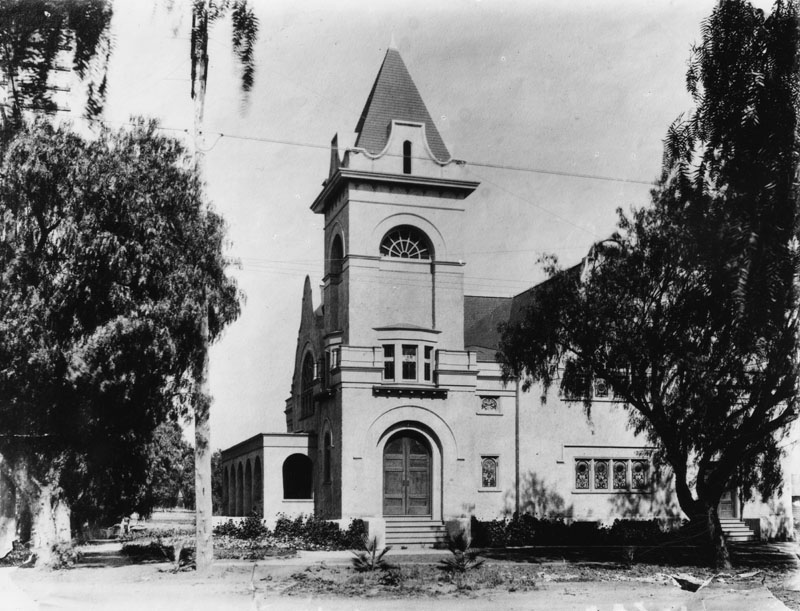 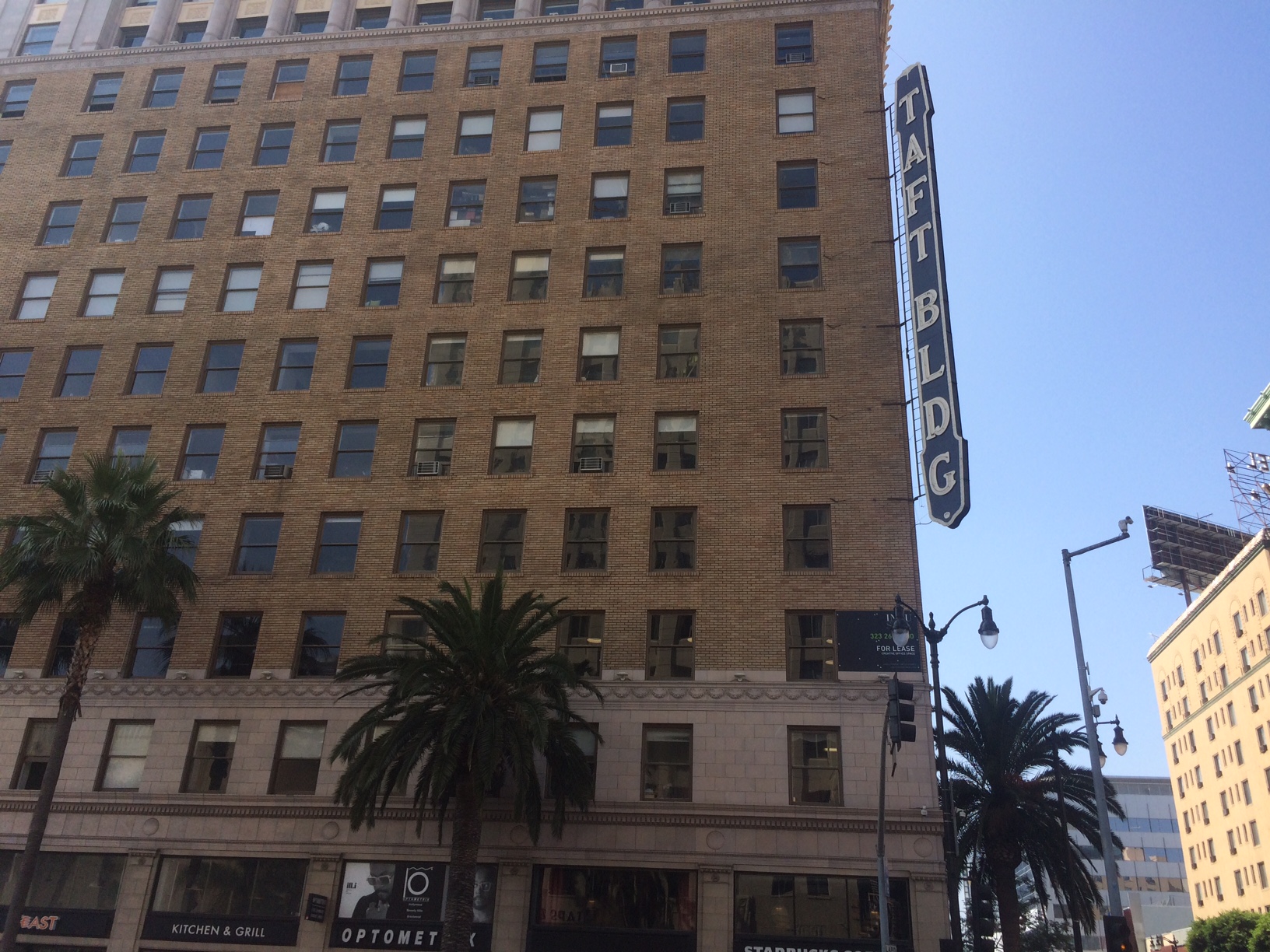 The Methodist Church of Hollywood was built on Hollywood and Vine in 1903, on land given to them by Episcopalian Daieda Wilcox. Churches played an important social role in the village of Hollywood. In 1903, the Times reported:

“The Methodist church gave a delightful entertainment last night for the benefit of the ladies and parsonage fund. The hall was crowded. A number of people from Los Angeles were present, and the guests of the Hotel Hollywood turned out in force.” 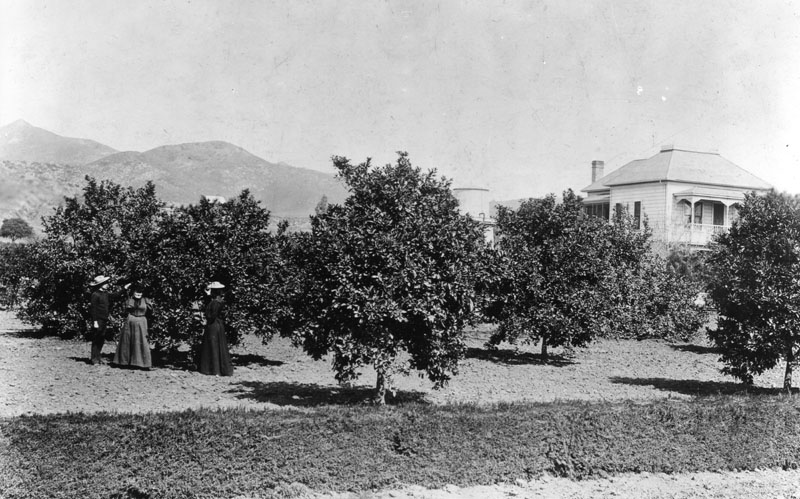 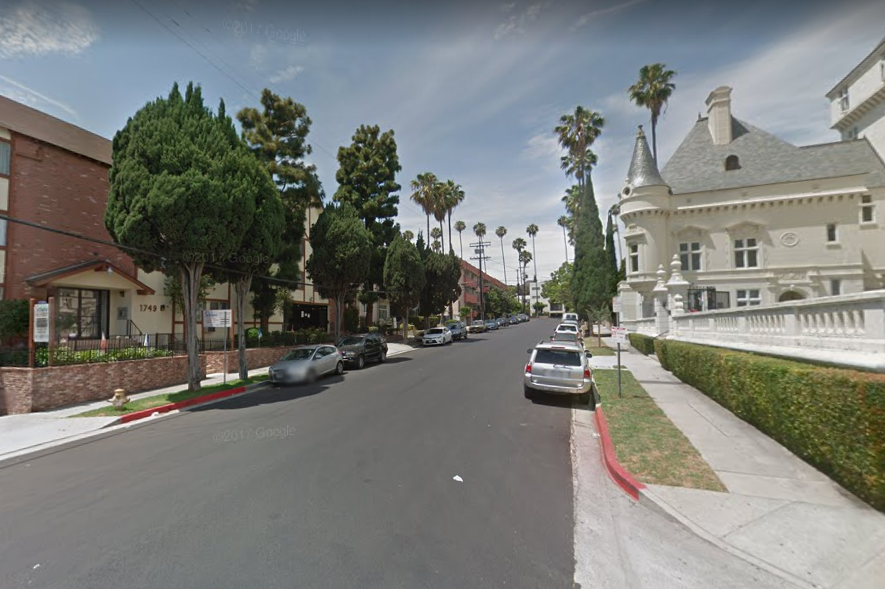 “Lovable rascal” Caroline “Grandma” Wakeman was one of Hollywood’s earliest and most vocal pioneers and sub-dividers. “Dignity, I never cultivated it,” she told the Times. “But I did go for wisdom.”

Born in Sweden, Wakeman, an original suffragette and one of the founders of the Hollywood Bowl, ran this 10-acre citrus ranch at Hollywood and Serrano. She claimed to have attempted to bribe the Pacific Electric to extend their line to Western Avenue with a $10 check. “They just couldn’t believe it would ever be built up here. But later when they did build it, they sent me my $10 back again.” Wakeman lived to 99, still chain smoking, drinking her whisky, and doing her daily exercises, which included swinging an Indian club. She died in 1926. 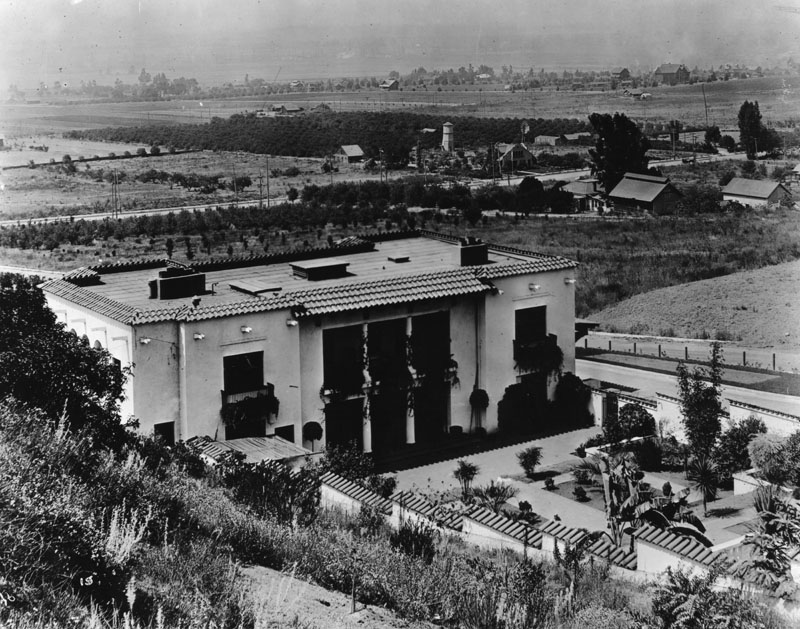 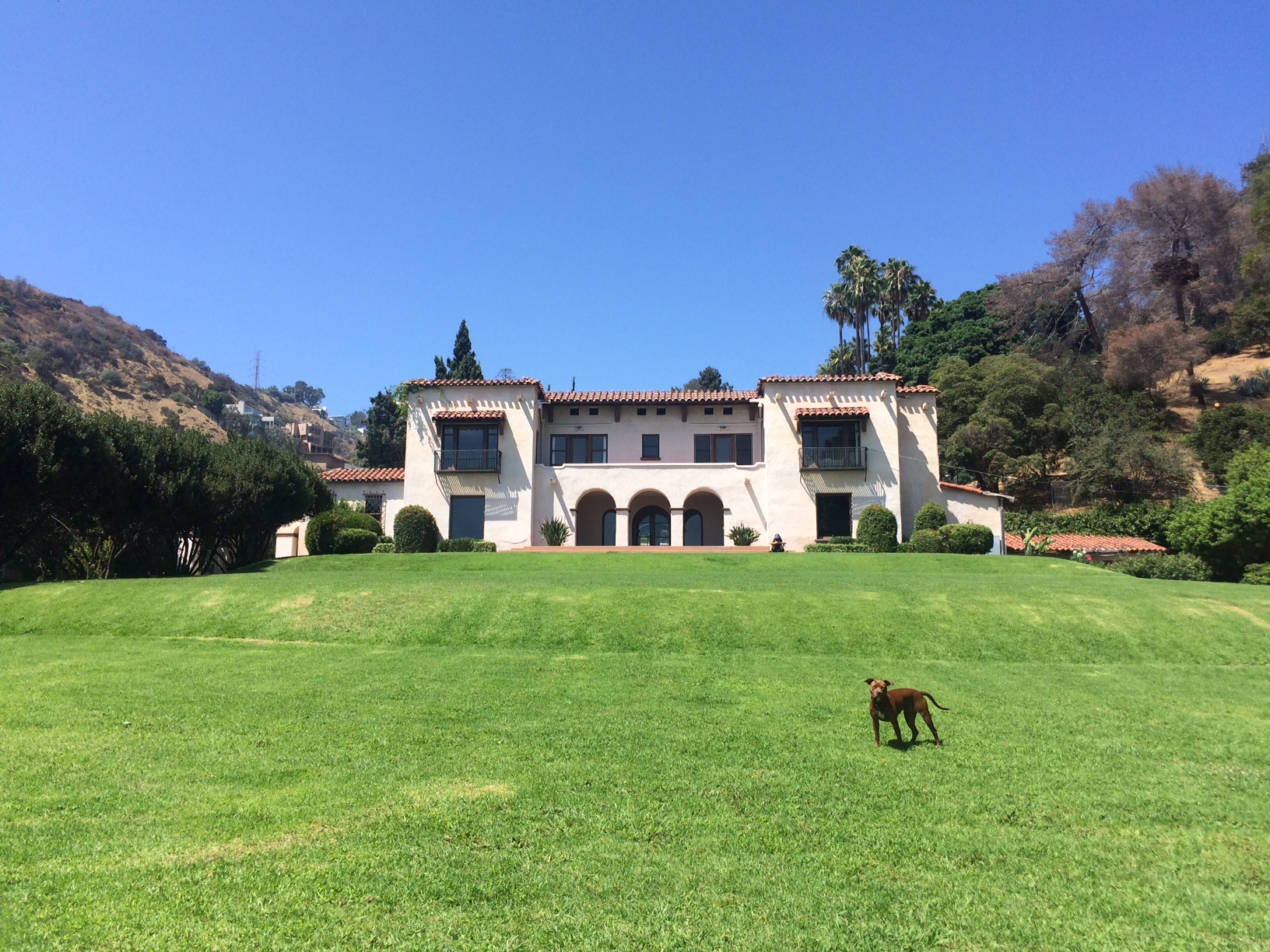 “In 1905, Omaha financier Gurdon Wattles built himself a winter home here named Jualita,” Williams writes. “Originally, Wattles stayed at Jualita two months of the year. When in Omaha, he opened Jualita to tourists. He lived in Jualita year-round during his retirement, dying there in 1932.” The Curson Avenue estate was once home to one of the finest Japanese gardens on the West Coast.

Now called Wattles Garden Park, it is beautifully maintained by the city of Los Angeles. 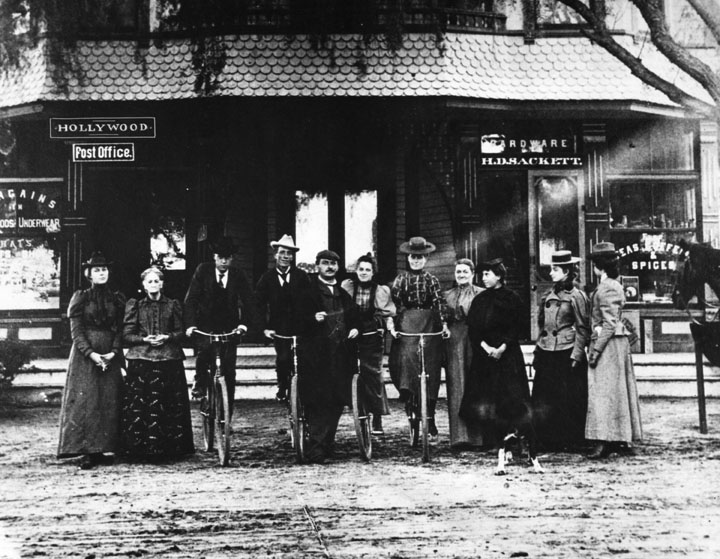 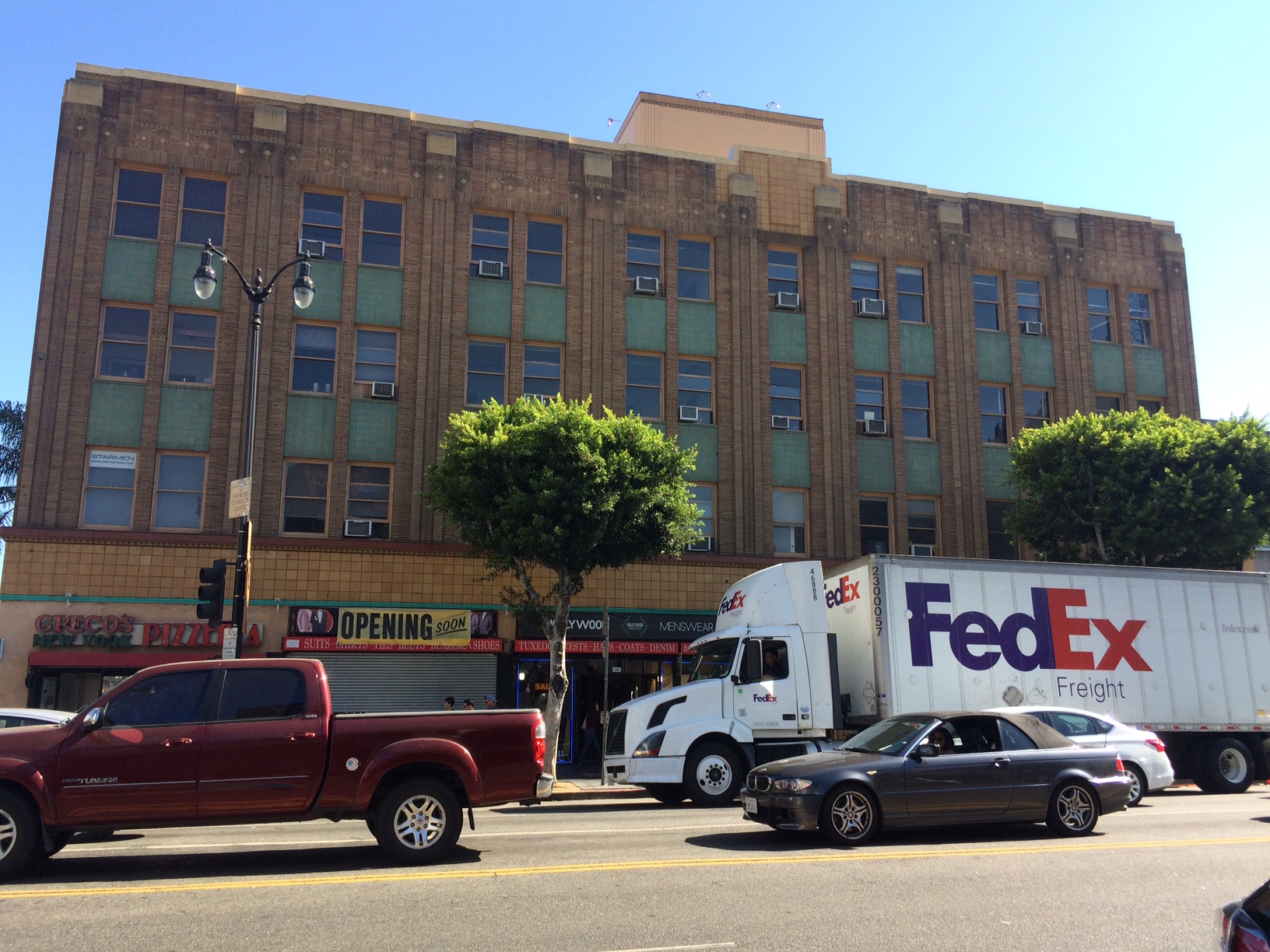 Hollywood got its first hotel in 1888, when the Sackett family opened this three-story rooming house, located on the southwest corner of Hollywood and Caheunga. “It allowed Hollywood to begin to support a business community,” April Clemmer explains. “It contained the first post office to serve the immediately surrounding area, the town doctor rented rooms and received his patients there, and its restaurant was a gathering space for the men who worked in the area. It had a large stable for travelers' horse and a dry goods store as well.” 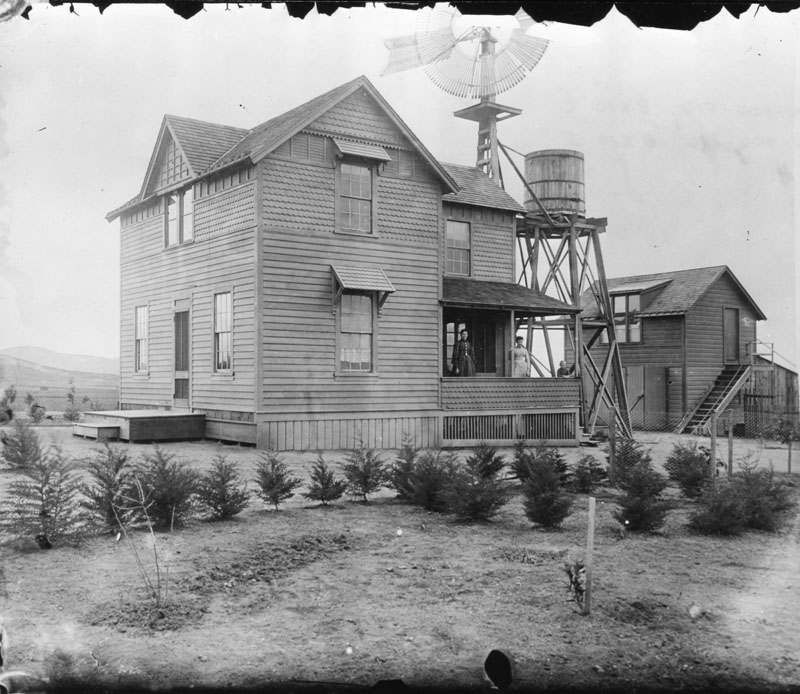 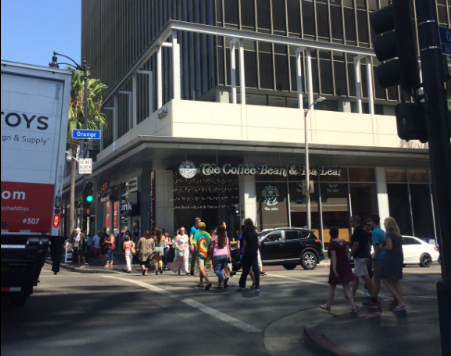 Mary Penman Moll, Hollywood’s first school teacher, owned a ranch near the corner of Hollywood and Highland next to a strawberry field. A prominent figure in early Hollywood real estate and civic circles, Williams credits her with petitioning fellow city leaders to change the name of Prospect Avenue to Hollywood Boulevard in 1910—over the fierce objections of her arch-nemesis Daieda Wilcox. 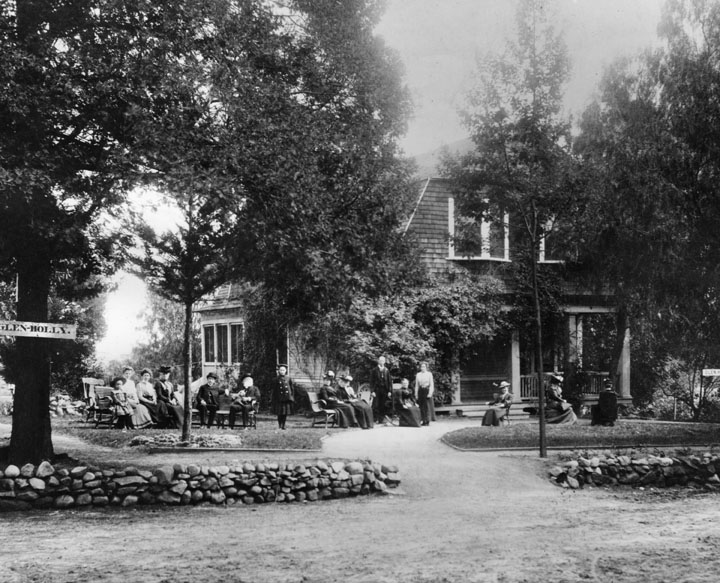 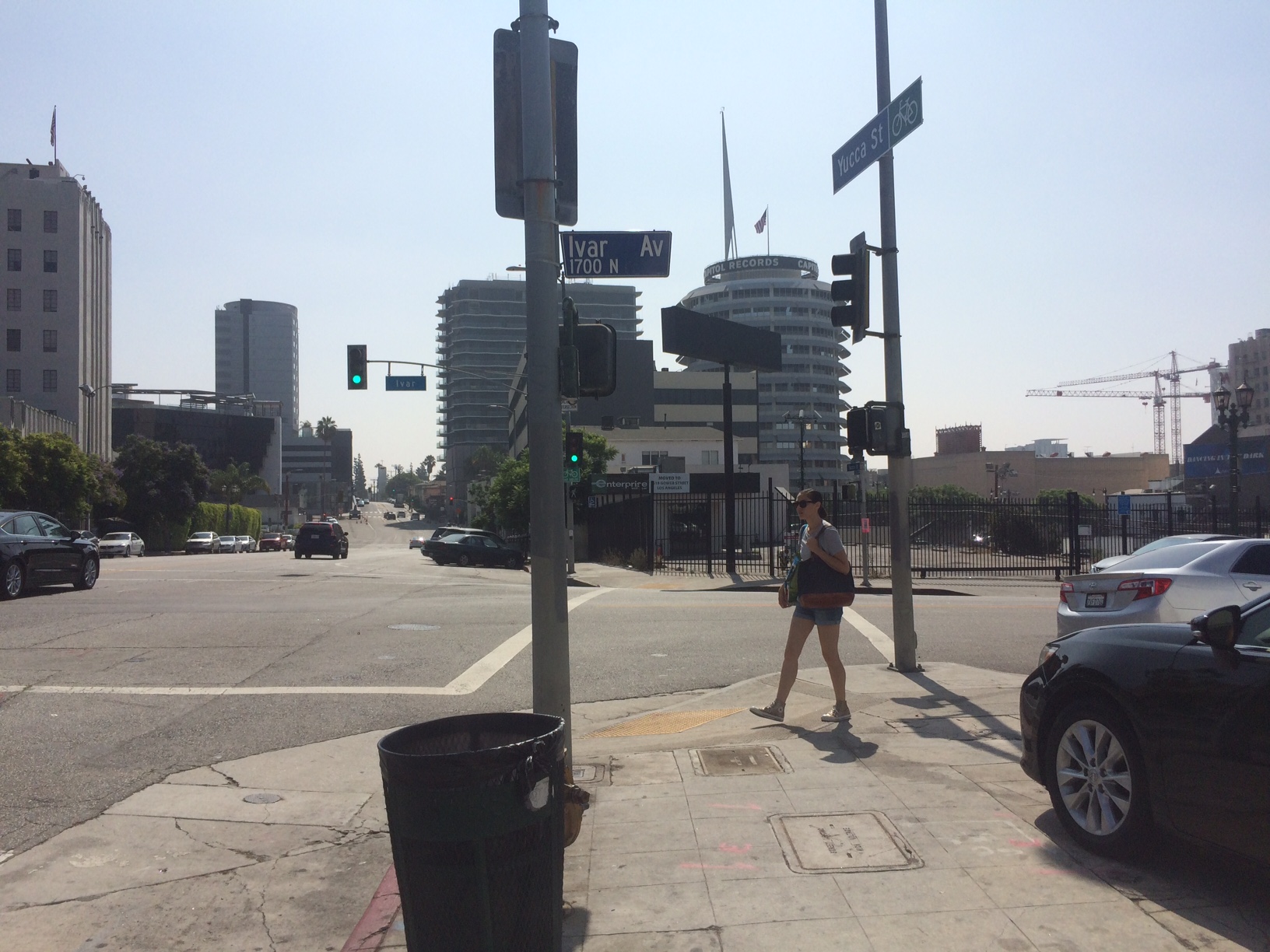 Trolley conductor Charles Merritt Pierce ran the Glen Holly Hotel. "I first came to Hollywood in October 1900, and opened the Glen-Holly Hotel at the corner of Yucca & Ivar Streets,” Merritt told a reporter. “We operated a tallyho which met tourists at the car line and took them on a guided tour of the area, then to the hotel for lunch and back to the car. I noted that many tourists were desirous of keeping in touch with their downtown hotels so I installed a telephone; it was the first telephone in Hollywood and it was a job bringing the pole line over from downtown Los Angeles.” 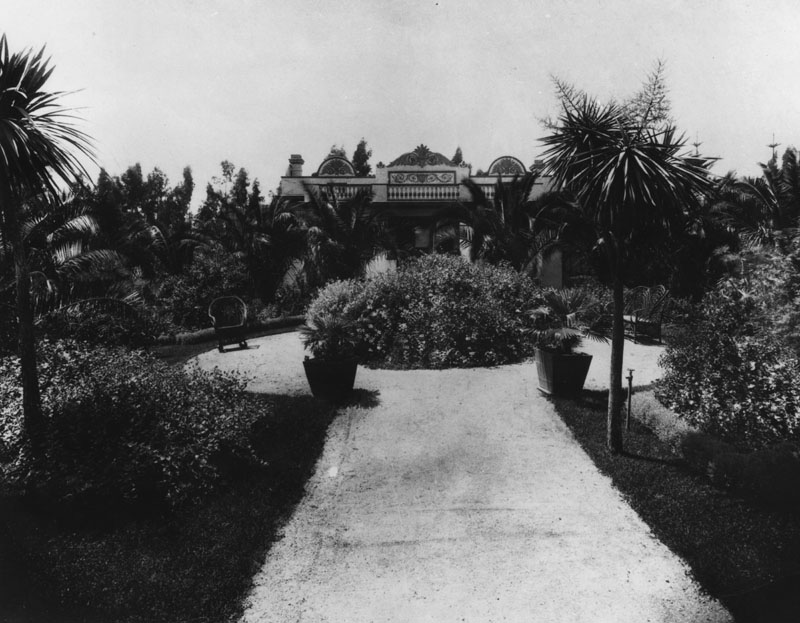 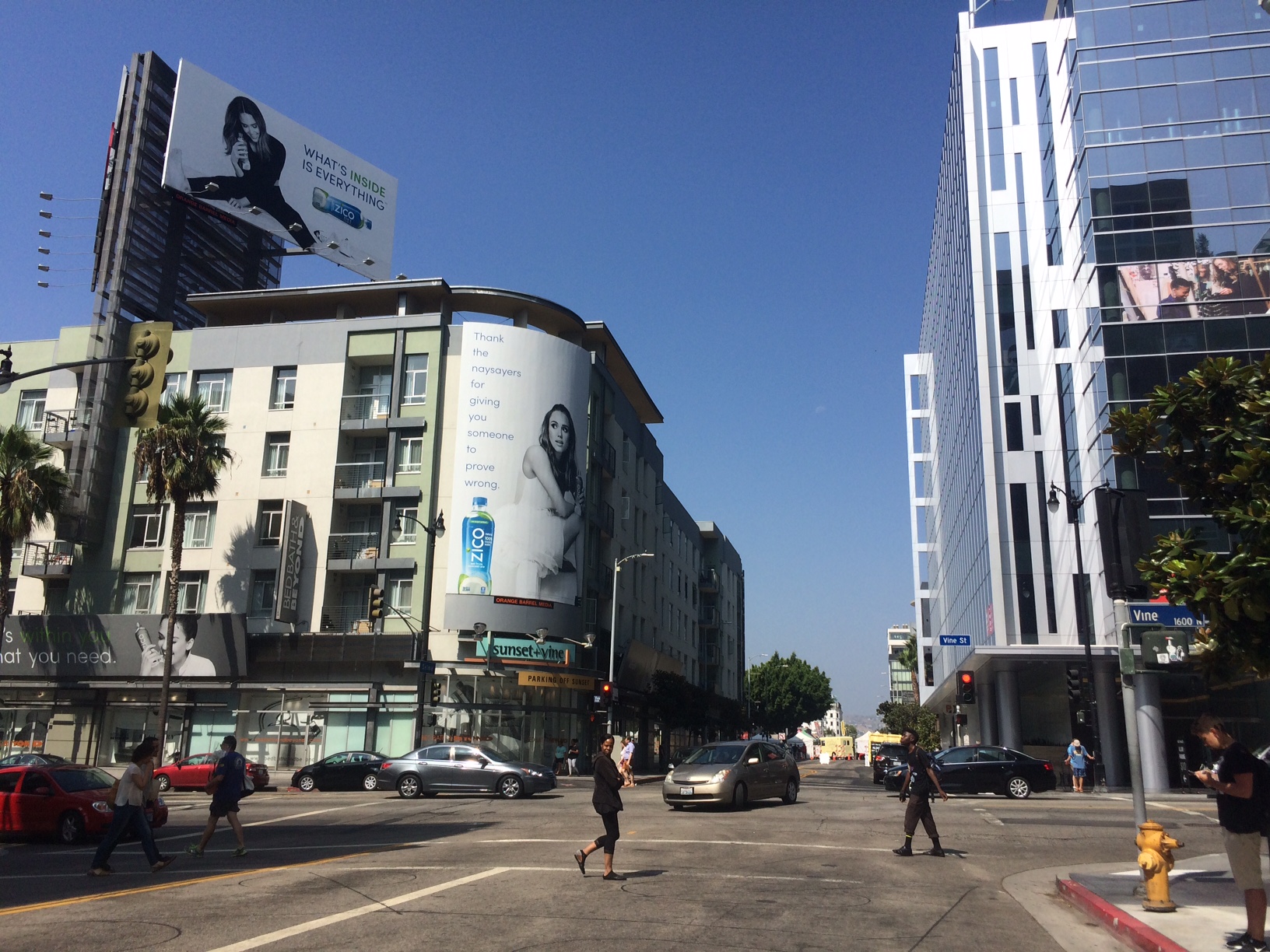 German-born Jacob Stern was one of the most powerful movers and shakers in the village of Hollywood. In the early 1900s, Stern bought a five-acre tract at Hollywood and Vine for $30,000. Confident in Hollywood’s future, he told friends that his land would one day be worth $1 million. The Sterns lived in a grand home at Selma and Vine, and grew citrus trees and planted gardens on the remaining acres.

According to Williams, Stern leased an old horse barn (now the Hollywood Heritage Museum) to Jesse Lasky, the future founder of Paramount Pictures, officially bringing the movie industry to Hollywood. The Sterns were active in Hollywood’s genteel social life (in 1913 Mrs. Stern won first prize at the Hollywood Chrysanthemum Show for best display). When Stern sold his estate in the 1920s, it was worth not $1 million—but $3 million. 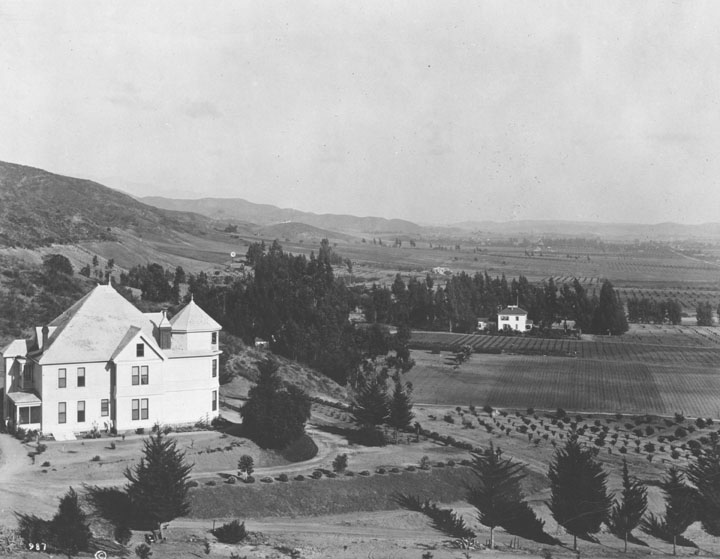 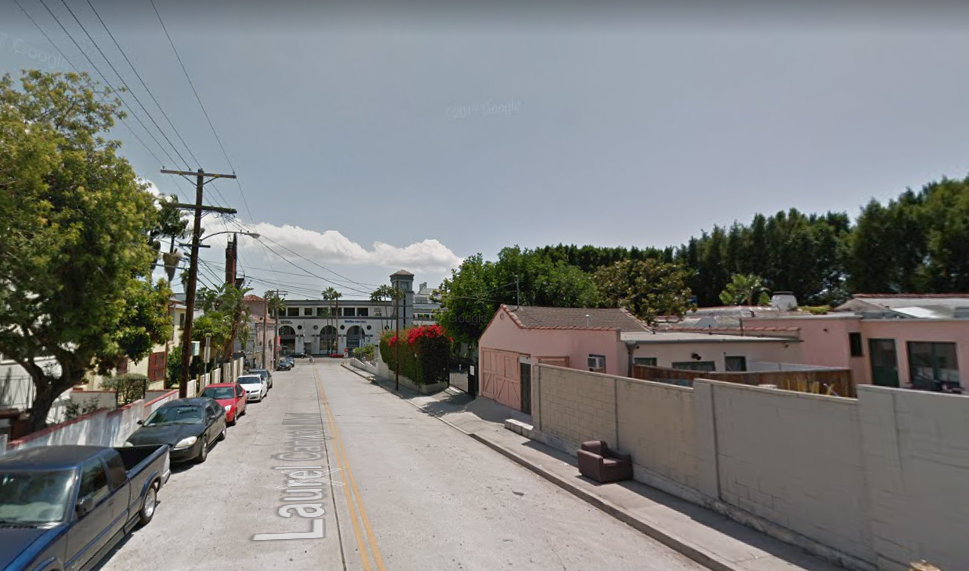 Native Georgian Charles F. Harper and his wife Martha settled in Laurel Canyon off Sunset Boulevard in the 1890s. They ran a large ranch that featured a fine country home and many working farm buildings. In 1907, the Times reported that the elderly couple’s golden wedding celebration in Laurel Canyon was attended by their five sons, including LA mayor Arthur Cyprian Harper.

Next Up In History