In Glendale, an Adams Hill Midcentury Showpiece Feels Like Home

A first-time buyer renovates a home built in 1963, landing it on the city's register of historical places

In the late 2000s, after years living abroad, Andrew moved to Los Angeles and set his sights on buying a home. But after combing the city for months, he still hadn’t found a place that met his criteria: a well-built midcentury home that was connected to public transportation.

He was on a tour in 2008 of historic homes in Glendale that brought him to Adams Hill, a hilly neighborhood in southeast Glendale, just north of Forest Lawn. On the tour, Andrew noticed a house across from one of the show homes was for sale. That house turned out to be exactly what he was looking for.Andrew’s 1963 midcentury home was built by a young architect, David Alexman, who’d graduated from the USC School of Architecture in the 1950s. The approximately 1,800-square-foot post and beam house sits on a steep, sloping lot, and has a wall of windows facing north, offering sweeping views of the San Gabriel Mountains and the occasional police chase on the 134 Freeway.

For Andrew, the appeal of the house goes beyond the current vogue that all things midcentury is enjoying. "Right now, [midcentury] is a trend that will ... go out of style again, but this is me. I’ll always be interested in midcentury." 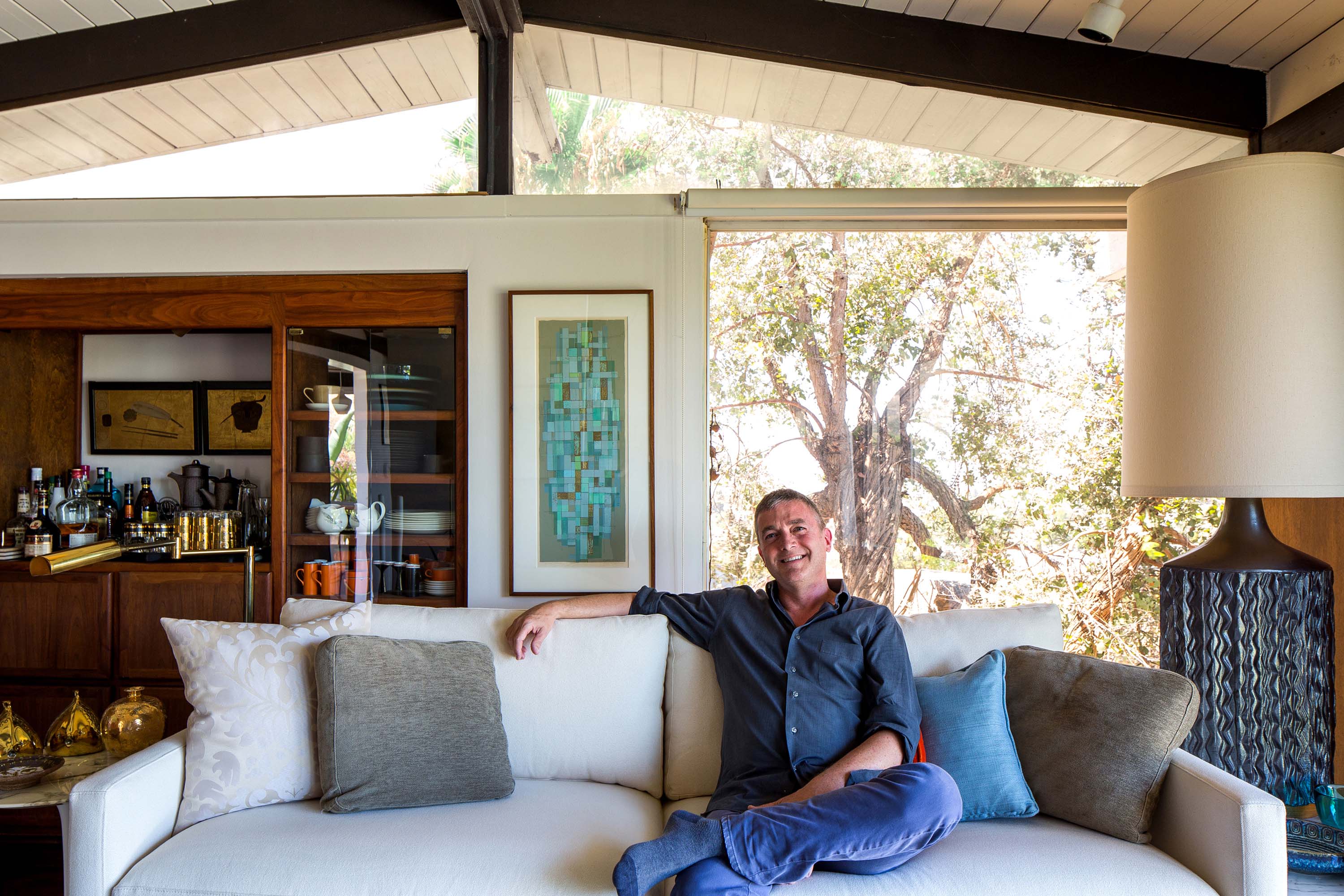 Though the house was structurally beautiful, it was badly in need of some updating. (Property records show he purchased the house for around $620,000, but Andrew says he got a bit of a discount because the house needed so much work.) He tore up tiles to reveal terrazzo in the entry stairwell; in the patio area, he removed a sad, old in-ground spa. Andrew turned one of the three bedrooms into a study, but maintains the other for guests.

Many elements were perfect just as they were, though, like the deep orange tiles in one of the house’s two bathrooms. "It was a selling feature for me," he says. 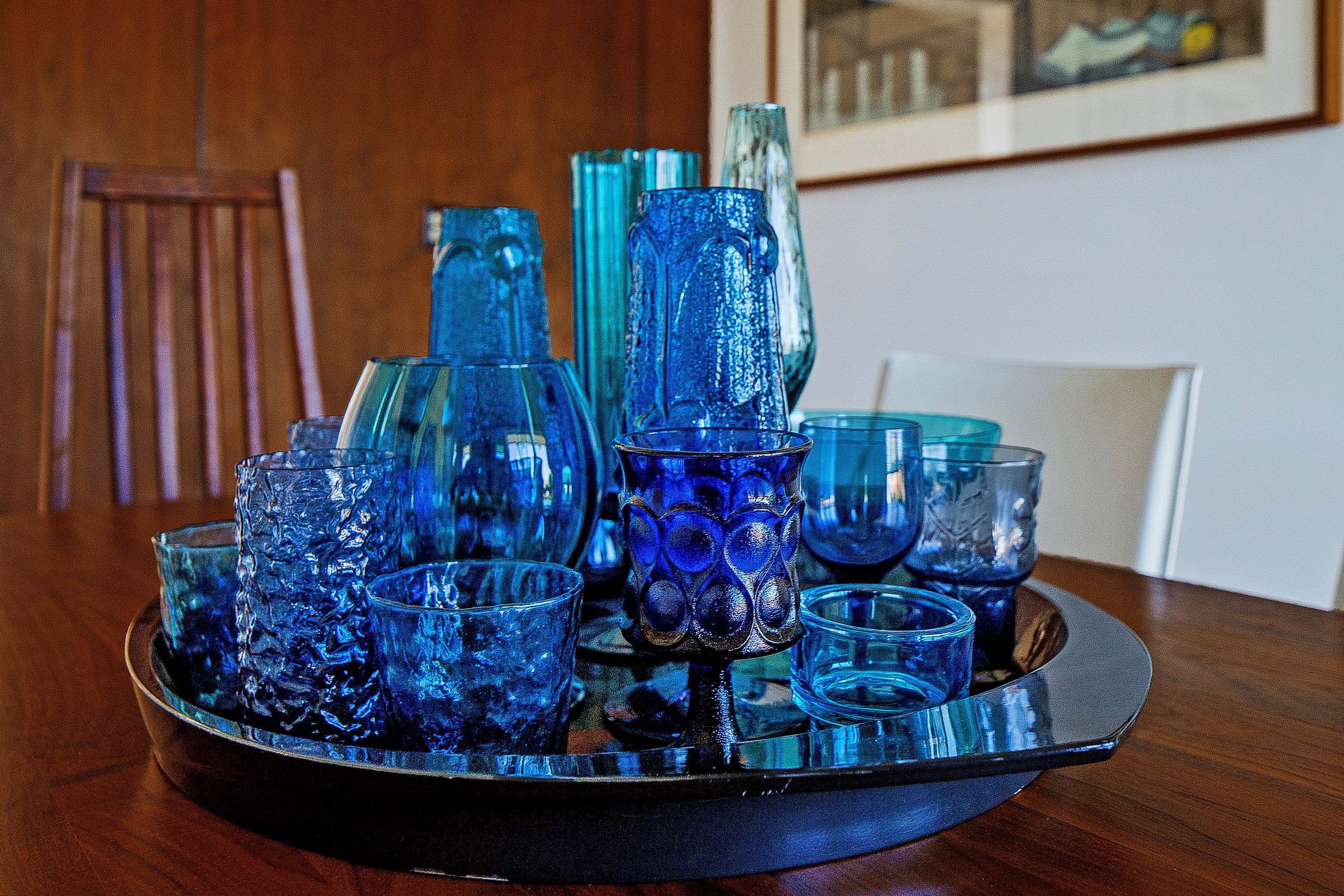 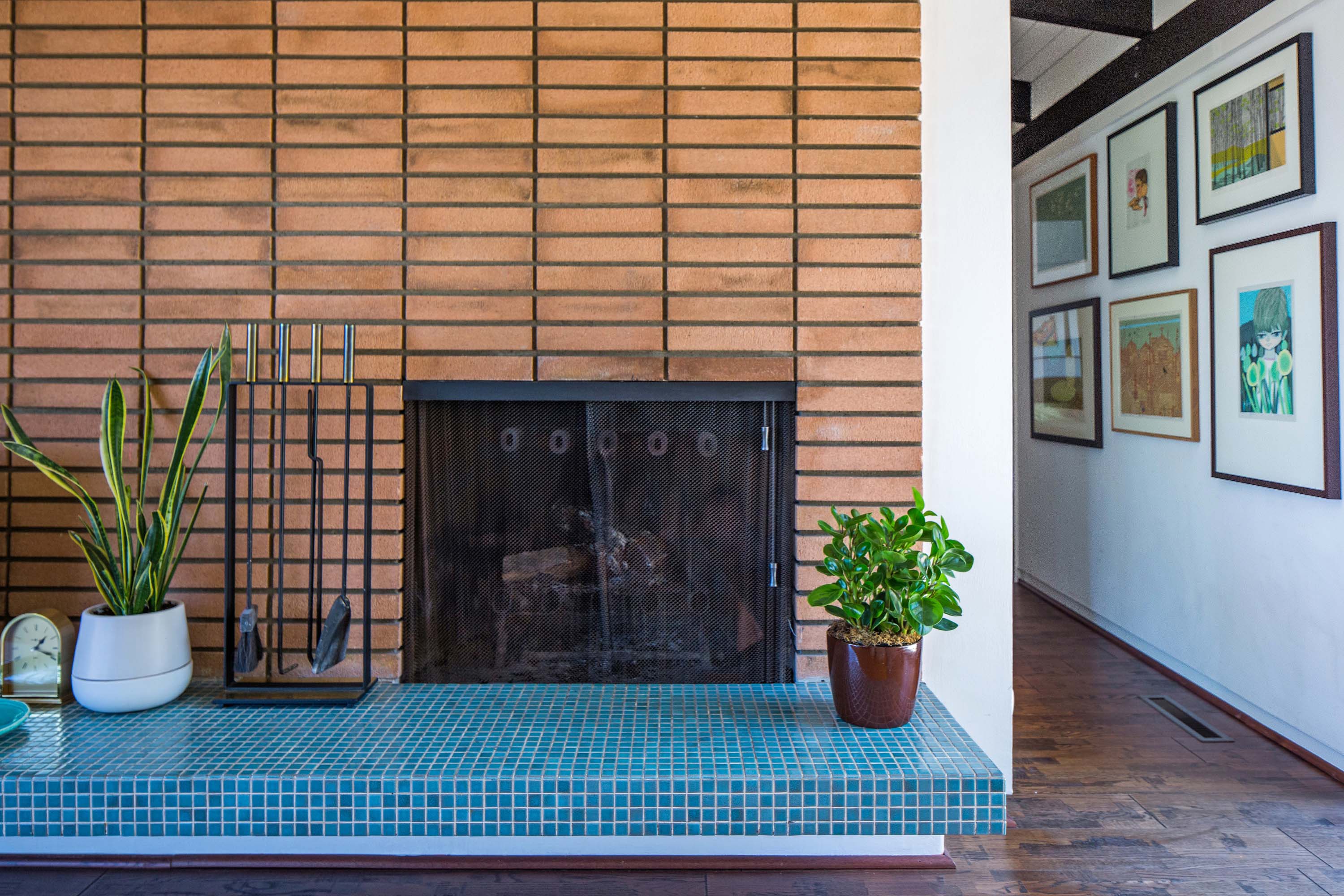 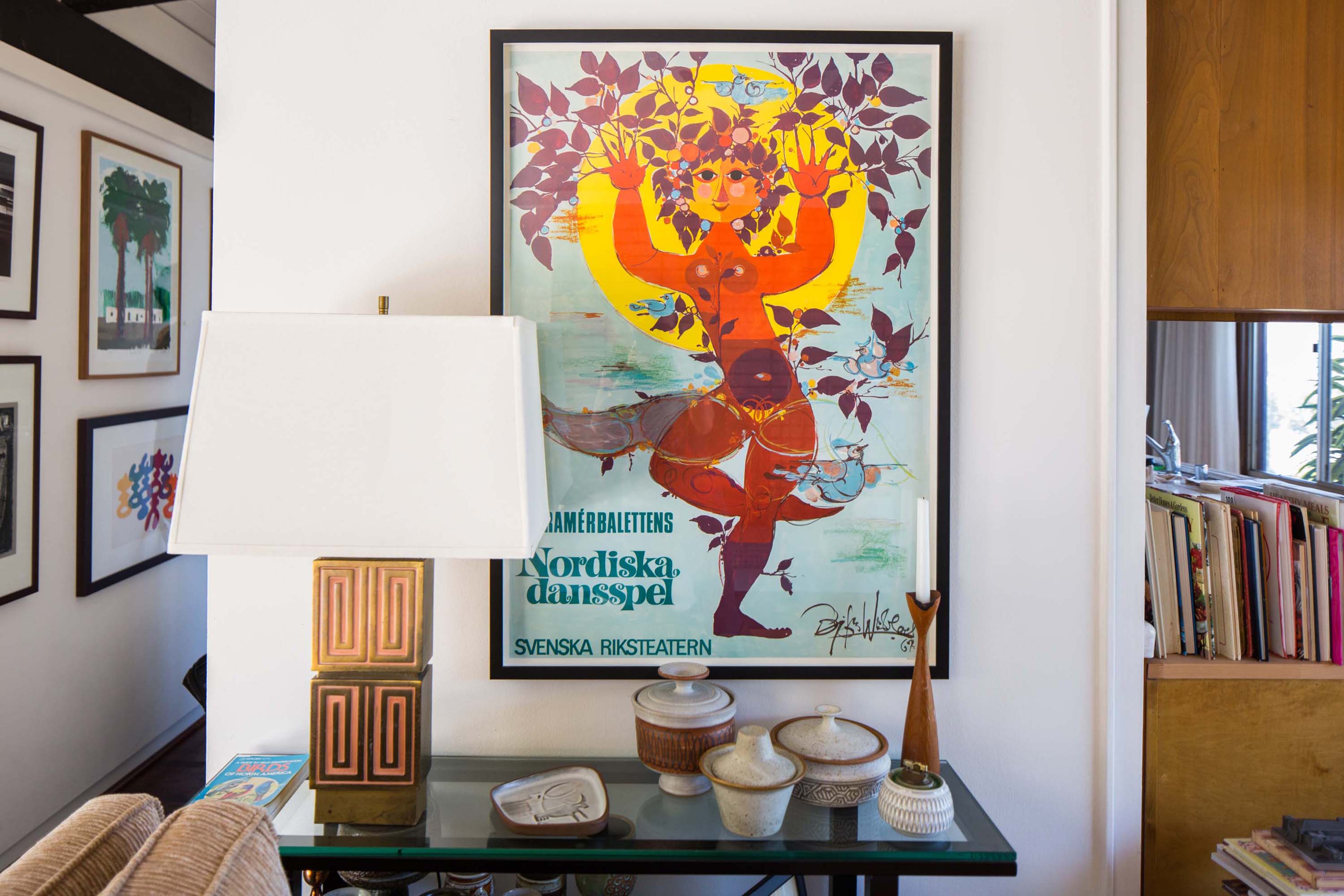 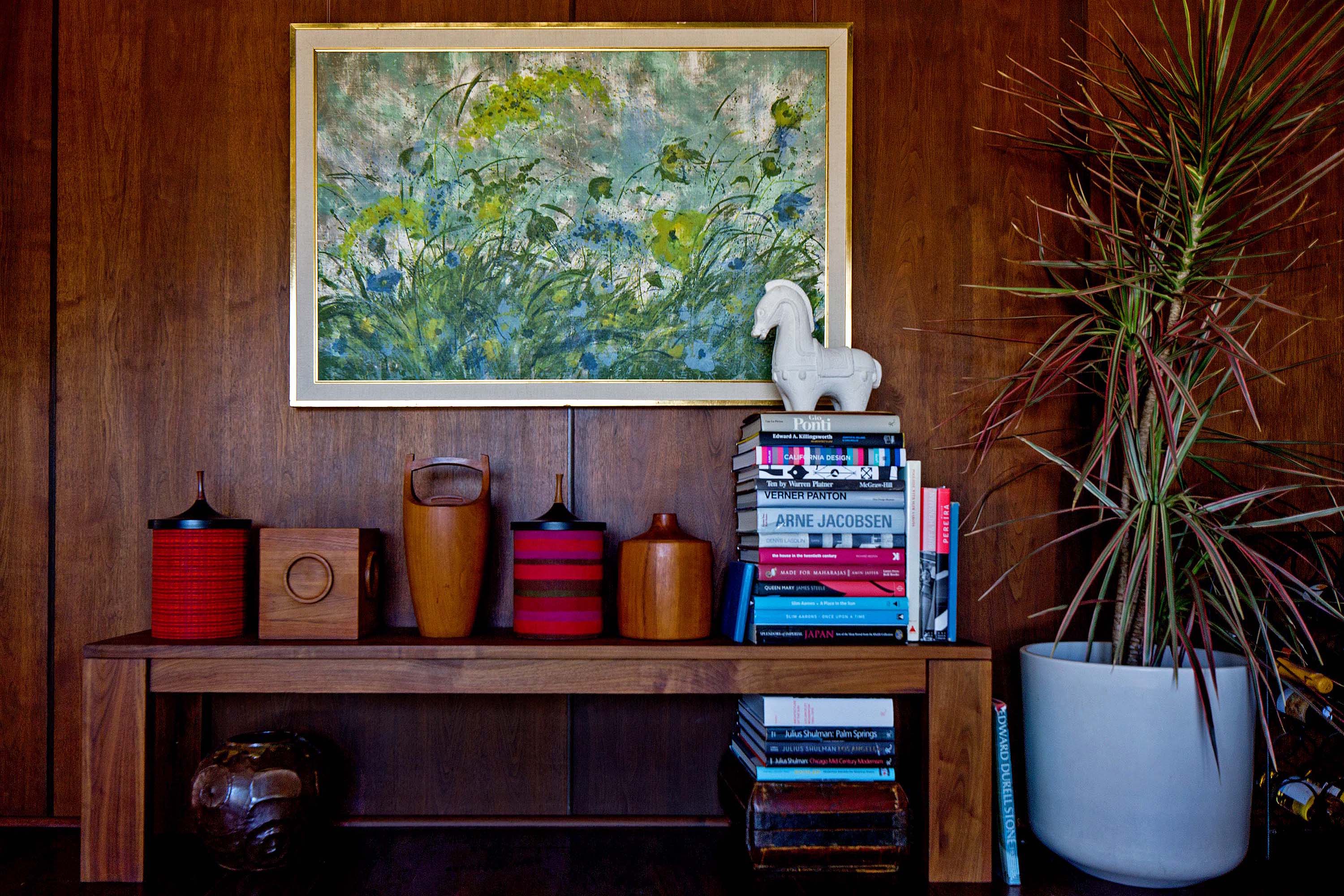 Through Andrew’s efforts, the diamond-in-the-rough residence was placed on Glendale’s Register of Historic Resources—a designation that will pass to the next owner, should Andrew ever decide to sell. Decorated with his extensive collections of period art, housewares, and furnishings, the house captures the midcentury era without veering into full-blown time capsule territory. Even the linoleum in the kitchen (an addition Andrew made) seems current.

Perhaps it helps, says Andrew, that the family for whom the house was commissioned was into trying out the latest tech and trends. The house still has hookups for a built-in vacuum system along the baseboards in the hallway, and the original house phone, built into the wall in kitchen, is still intact.

A historic home is a bold purchase for a first-time homeowner. Any changes to the exterior of the house have to be cleared by city officials. Getting central air has proven to be a complicated task; for now, keeping cool involves ceiling fans and opening windows to allow the breeze to pass through. More so than with most houses, there is always some repair to be done. But Andrew is more than up to the challenge. "It’s fulfilling to do the work. I don’t resent having to [do it] ... I have a mission now to preserve this house."