Renowned architect Frank Gehry has been talking for years about building a new home to free himself and his family from the quirky Santa Monica residence they've lived in since the 70s, one of his first big statements on deconstructivism. In 2004, the Los Angeles Times interviewed Gehry about his budding plans to build a new house in a low-key corner of Venice. The compound was designed to be decidedly unlike anything the architect had done before, a request of his wife, Berta.

Gehry has waited more than a decade to begin construction on his dream home, at one point abandoning the site in Venice to begin designing a second Santa Monica house, a dramatic structure with a playful roof and huge timber beams. Work is underway now on both properties—two new homes by a Los Angeles architect who continues to brand this city with his postmodernist style.

If there's one L.A. Gehry project that has stood up to his Walt Disney Concert Hall, it remains his longtime home on 22nd Street in Santa Monica. Since moving there in the late 1970s, he has twice renovated and completely Gehry-fied the pink Dutch Colonial. Instead of knocking down the original structure, he built around it a new home of wood and glass. He incorporated chain link fencing into the house's exterior as a "decorative element," a feature which, like the rest of the house, many neighbors did not like.

In 2005, Gehry, told the New York Times he’d outgrown the place. Living in one of his most famous works was stifling, he said, and he worried the home would become a burden to his children after his death. "I was emotionally trapped because it was this icon," he said. So, he told the newspaper, he was designing a new family home, this time in a modest Venice neighborhood.

It would span three separate but adjoining lots, which he had purchased in 2002, just west of Lincoln Boulevard. It was laid out as a family compound with a main house, guest quarters, and communal spaces, designed to provide enough privacy for everyone to be at the property at the same time without bothering each other. In the section that Gehry and his wife would share, "the rooms will seem to pull apart and come together again, so that the couple can experience varying levels of privacy," the New York Times wrote. 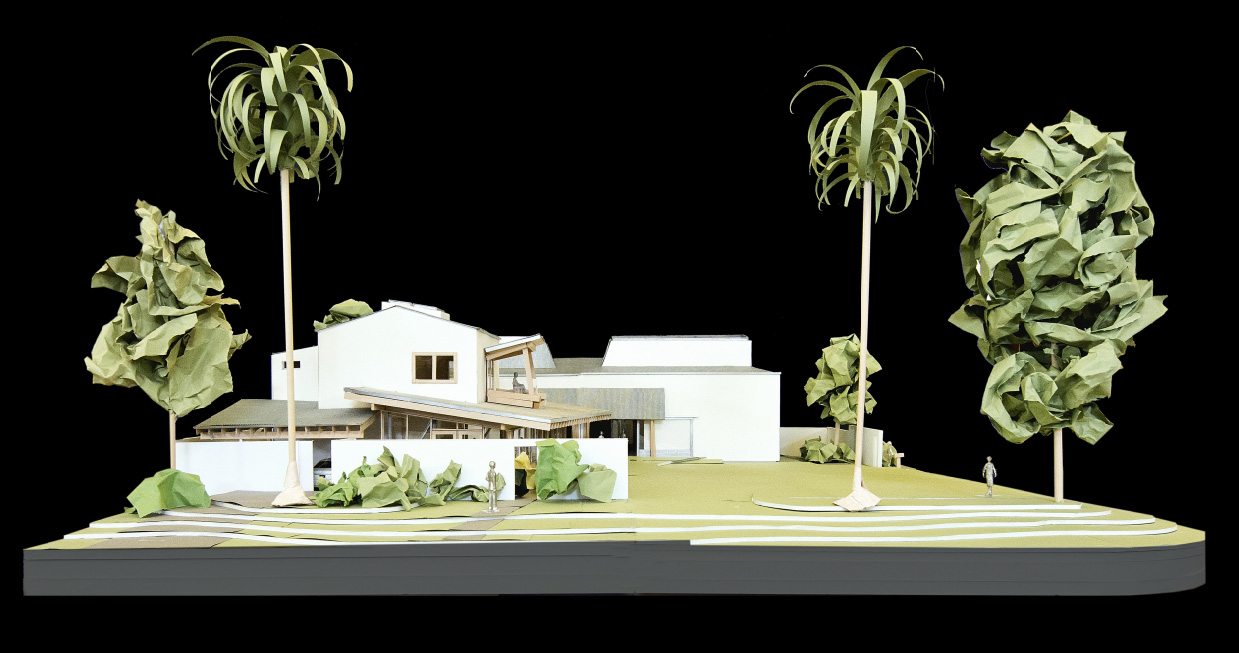 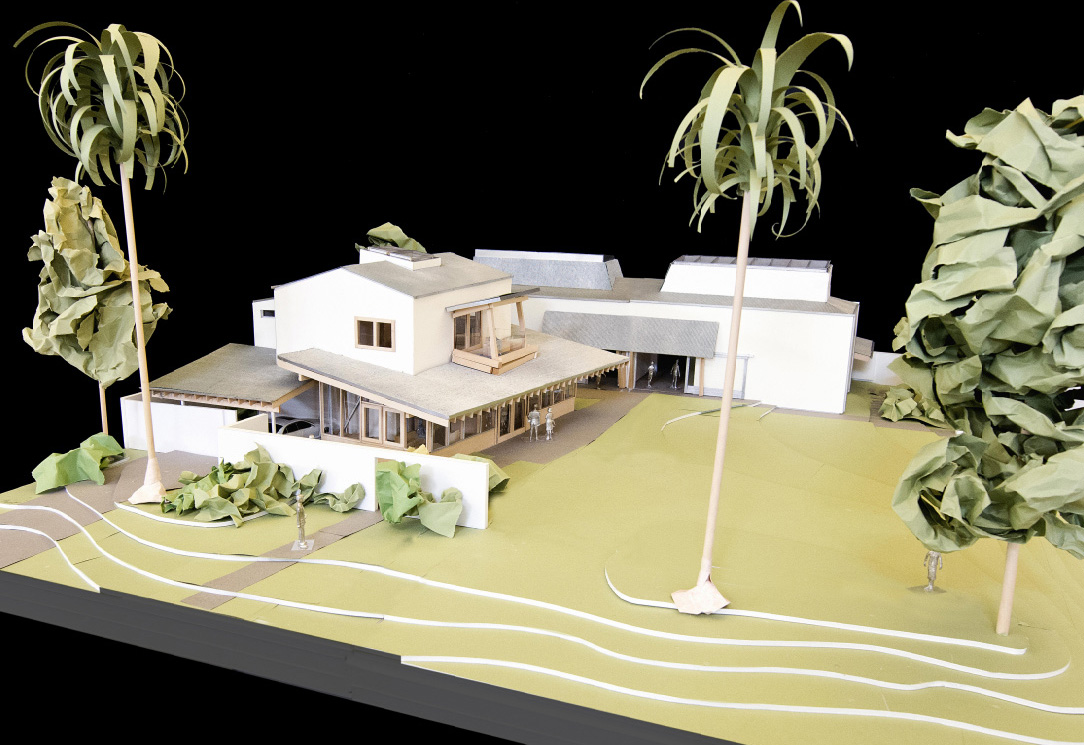 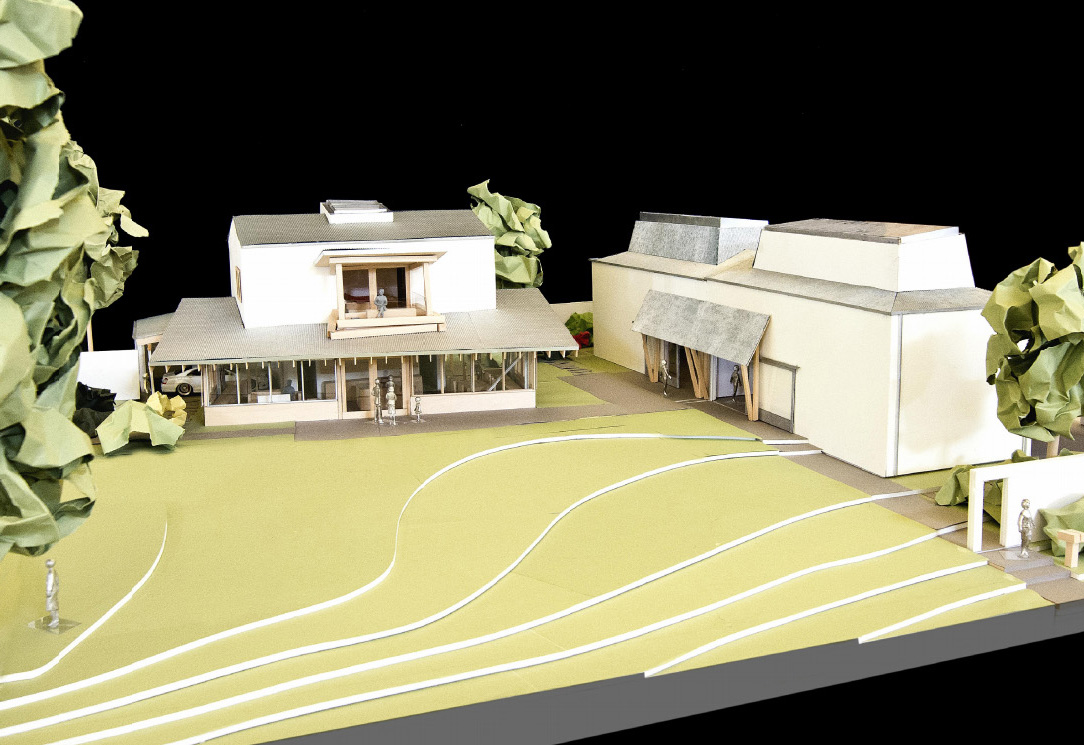 September 2015 models of the Venice compound, as seen in planning documents submitted to the Venice Neighborhood Council.

In those decade-old newspaper interviews, Gehry was eager to start building, saying he wanted to break ground in a year and move into the compound within two. But in his 2015 Gehry biography Building Art: the Life and Work of Frank Gehry, architecture critic Paul Goldberger explained that as the Gehrys were planning their Venice home, they began to have second thoughts about relocating to this particular neighborhood. From Building Art:

...during the extended period while they awaited planning approval, neighbors began to dump garbage on the empty lot; the Gehrys hired a gardener to landscape the property and keep it looking neat, and when that did not stem the flow of garbage, they surrounded the property with a fence and a locked gate. Vandals broke the lock repeatedly, and Berta began to have serious doubts as to whether she wanted to live in that neighborhood at all.

Their concerns mounted until, Goldberger wrote, "in 2007, five years after they had bought the property and Frank had begun the design process, he and Berta decided to abandon the project." Gehry told The New Yorker he had given up on the Venice house because, "I came up with thirty different houses, and I could never decide."

But, according to Goldberger, Gehry still wanted to design a new home, so in 2011, he bought property on Adelaide Street in Santa Monica—a house "on the best street in the best neighborhood in Santa Monica." Gehry figured if the new home he built wasn’t to his liking, he would sell. With his name on it and its location in an outstanding neighborhood, it would likely to be a moneymaker. The Venice project, in a less affluent neighborhood, didn’t offer the same sense of security.

In the end, Goldberger wrote, Gehry liked how the Santa Monica project was shaping up. "By the end of 2014, with construction well under way … thoughts of selling the new house were put aside."

Construction is humming along, and for an architect who gets a lot of press, it's surprisingly without any fanfare. As of late July, the house has glass walls and a distinctive a roof—a cluster of smaller roofs each oriented differently and overlapping.

The new Santa Monica compound will contain a back house with a spa, studio, and caretaker's quarters, plans filed with the city of Santa Monica show. The main house will incorporate huge timber beams; a pergola will greet guests entering from the street.

At the same time this house goes up, construction is also underway on the property in Venice, despite the fact that Gehry had abandoned his plans for it. There are signs that grading has been done; permits for building out elements of the compound, including a duplex-like structure, were approved in April and May.

It's not clear why he resumed work in Venice (Gehry Partners did not respond to requests for an interview), but it doesn't appear he's resurrected his plans to live there. While in planning documents filed in 2015 with the city of Los Angeles Berta Gehry is listed as the applicant for the Venice house, its habitants will likely be two artists. They were introduced at a Venice Neighborhood Council in November last year as the future residents, and it's rumored they are Gehry family members.

The homes are under construction as Gehry ages into his late 80s, and as his name is stamped on some of the most high-profile projects in the city. His Grand Avenue Project—a multi-parcel, Bunker Hill development underway for years—just won more than $198 million in "financial aid" from the city. He's also behind a luxurious new hotel and condo project on Santa Monica's Ocean Avenue, a multi-tower development on the Sunset Strip, and the pro bono design of a two-acre campus for a children's nonprofit in Watts. He's even moving beyond designing buildings, working on a master plan for the entire 51 miles of the Los Angeles River.

At the same time he changes L.A.’s landscape, it looks like he’s creating for himself a fresh, personal environment, an attempt to leave behind the definitive Gehry he lived in for so long. It’s impossible to tell how the new Santa Monica residence will look when completed. As it takes shape, it stands out among the Spanish and Craftsman-style houses on the block. But it probably won't bother the neighbors as much as his provocative Dutch colonial. The new, inoffensive house seems in step with Gehry's wish to leave his flashy, iconic home behind. Plus, they’re probably used to Gehry by now.

Watch: Harry Gesner and the design of the Wave House

Jason Segel is selling his Los Feliz house for $2.8M