What Comes After Midcentury Modern?

Palm Springs, famous for its midcentury gems, might just help America fall in love with brutalism

More than any time since its original boom days as a hideout for Hollywood actors, the city of Palm Springs is thriving, with hotel occupancies and tourist revenues at record highs and home sales brisk. The city’s two biggest cultural exports, Coachella and midcentury modernism, are symbiotically spurring Palm Springs’ growth.

“When Coachella first began, it happened because Palm Springs was nearby, and now Palm Springs has gotten more popular because of Coachella. And eventually people who came here first for Coachella are getting interested in modernism and buying homes here,” Gary Johns, a real estate agent and the vice president of the Palm Springs Preservation Foundation, told me as we toured Canyon View Estates, the original white-brick, midcentury condominium complex, designed by Palmer & Krisel, on which many condominium complexes in the area were later based. In the city’s Uptown Design District, shops have been selling to buyers as far as Australia, some of whom visit expressly for the purpose of buying midcentury furniture, says Miguel Linares, owner of modern furniture boutique A La Mod.

But in an era when midcentury modernism has become mainstream, Palm Springs design and architecture after the midcentury still remains largely invisible in the popular imagination. To most people, Palm Springs architecture ended in the mid-1960s. Regardless of how aware visitors are of Palm Springs’ more recent architectural history, however, the city’s recent growth is directly contributing to a new phase of historic preservation and appreciation.

"If we hadn’t passed its historical Class 1 designation through in November it would have been torn down," Johns told me as we drove to Tahquitz Plaza, built in 1973 and designed by local architect Hugh Kaptur, who is maybe most famous for his work designing the homes of actors Steve McQueen and William Holden.

"We fought for it for a year, but the argument people had was that it’s not midcentury." Kaptur himself, who is still working in Palm Springs, argued for Tahquitz Plaza’s preservation in an April 8, 2015 op-ed in the Desert Sun. "I had great artistic latitude as it was to become my offices. I designed the building to ‘grow’ from the desert floor. I feel these buildings are some of my best work from that period."

During the city election last November, residents and businesspeople who see how design is driving Palm Springs’ economic growth pressured candidates to adopt a preservation platform. With the election of pro-preservation mayor Robert Moon, Johns told me, "the developer did an about-face and came up with a plan to support the designation and subsequent restoration. New tenants are clamoring to be in these restored buildings. So it’s a major win, all in the last six months."

If it weren’t for the 2008 recession, the buildings might already have been demolished. Cory Alder, of developer Nexus Companies, explains "We bought these buildings in 2006, but the recession hit and the plans all evaporated, so we were trying to figure out what to do. We had a plan for a three-story mixed use complex, and that’s when the preservationists came up and said ‘we’d like to save these buildings.’ We’re good community partners and so that’s what we’re going to do."

When we arrived at Tahquitz Plaza, I was struck by how modern it looks, not just in terms of the 20th century modernism that Palm Springs is known for, but in the way it adds a fresh vernacular to the throwback midcentury modern look that became popular in the last decade.

The building features a white stucco facade reminiscent of the adobe minimalism of Marfa, but the stucco is heightened, extended, and rounded in places to give the dense curvature of a bunker. The bunker look is enhanced by long horizontal windows shaded by Jetsons-like sculptural overhangs. A disciplined line of thin vertical windows, reminiscent of the arrow slits in ancient castles, align along one curve. And in a refreshing change from the reclaimed wood that is so common today, Tahquitz Plaza uses a dark, stained wood in horizontal and diagonal patterns, offsetting the stucco and bronzed glass of its windows and entryways.

"The building doesn’t look ordered, but it’s very disciplined," says architect James Cioffi, who worked with Kaptur in the 1980s and is helping Kaptur and another architecture firm restore the building. The overall effect of Tahquitz Plaza is a kind of natural, retrofuturistic, 1970s modernism, distinguished from the thin-roofed, glass-walled buildings of the 1960s by its bigger scale, organic shapes, and thicker lines. 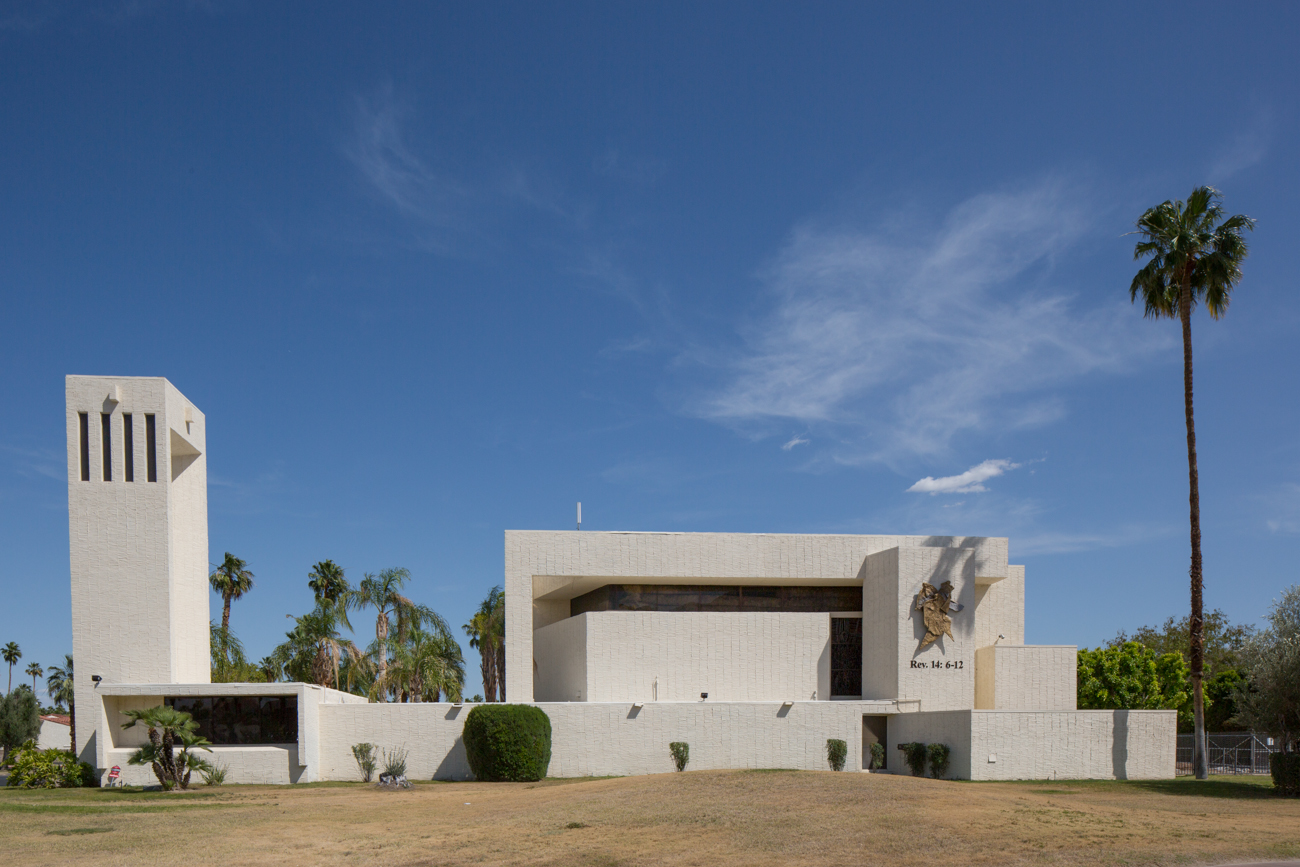 "For the longest time, in order for a building to qualify as a Class 1 historic site in Palm Springs, it needed to be pre-1945. Everything post-1945 had no chance for protection. So a few years ago we were able to change the city's ordinance from 1945 to 1969, and now we’re working at amending the ordinance to a 40 year rolling window. In 2016, using the 40 year rule, another set of buildings becomes eligible," Johns told me. Tahquitz Plaza is the first post-1960s building to receive Class 1 historical designation, for extant buildings considered historically significant, but once you begin to learn the architectural language of post-midcentury Palm Springs, buildings of the period start to become visible around town.

The horizontal windows of Tahquitz Plaza reappear on Kaptur’s 1967 Musicland Hotel, which strikes a look somewhere between adobe dwelling and recently landed spaceship. The Musicland building also has Tahquitz Plaza’s smoky bronze glass, lending a sleek privacy that in its surface also reflects back the earthy shades of the San Jacinto Mountains.

Palm Springs’ architectural evolution in the late 1960s and 1970s was spurred not only by changing fashion, but also as a correction to the unsustainability of midcentury designs. "The buildings of the 1960s had some inadequacies in terms of weatherability, with thin, uninsulated roofs and glass walls," Cioffi told me. "As time progressed in the 1970s and ‘80s, the shapes tended to get thicker and heavier. There was a regional effect too where designers like Hugh started to take cues from the indigenous architecture, using materials reminiscent of brick and adobe, that work well in landscapes without much foliage and trees." 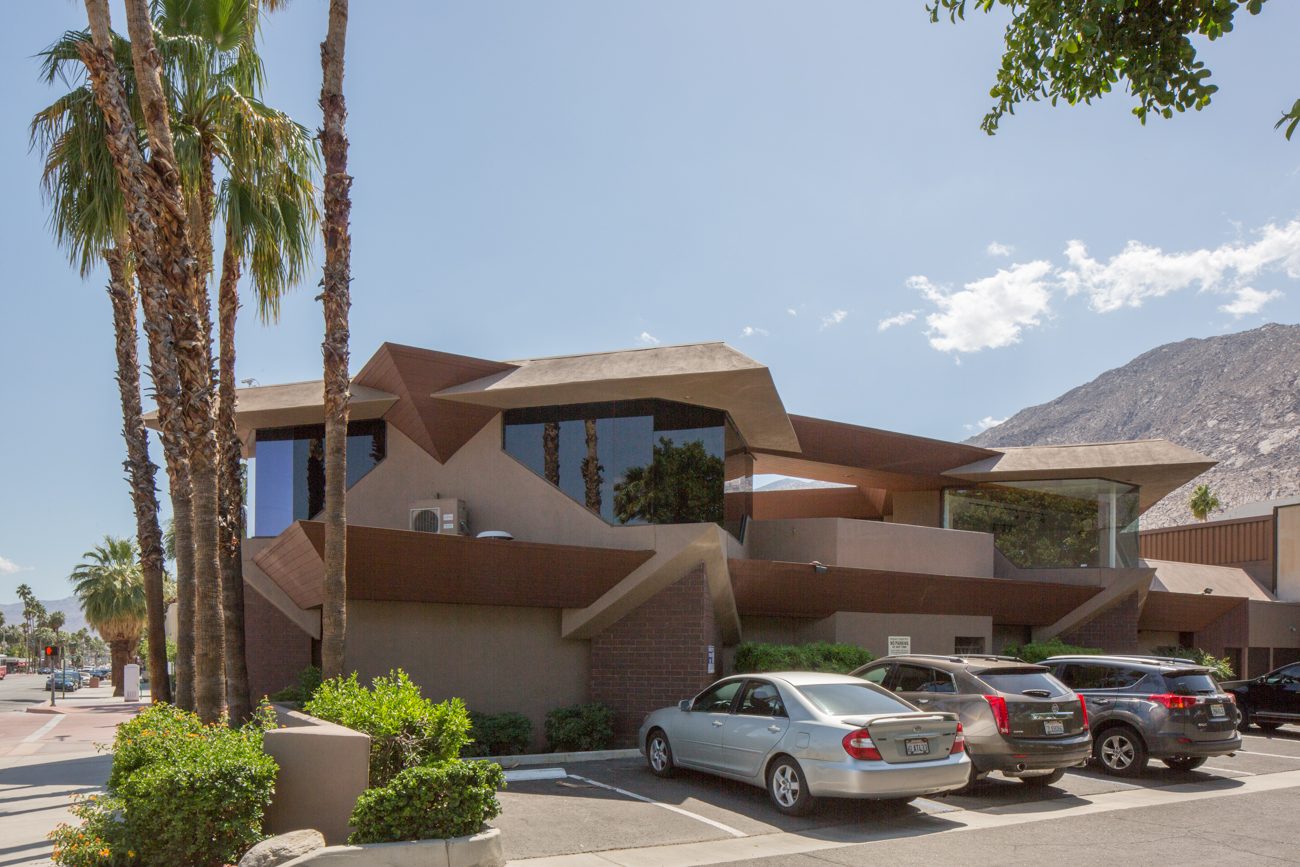 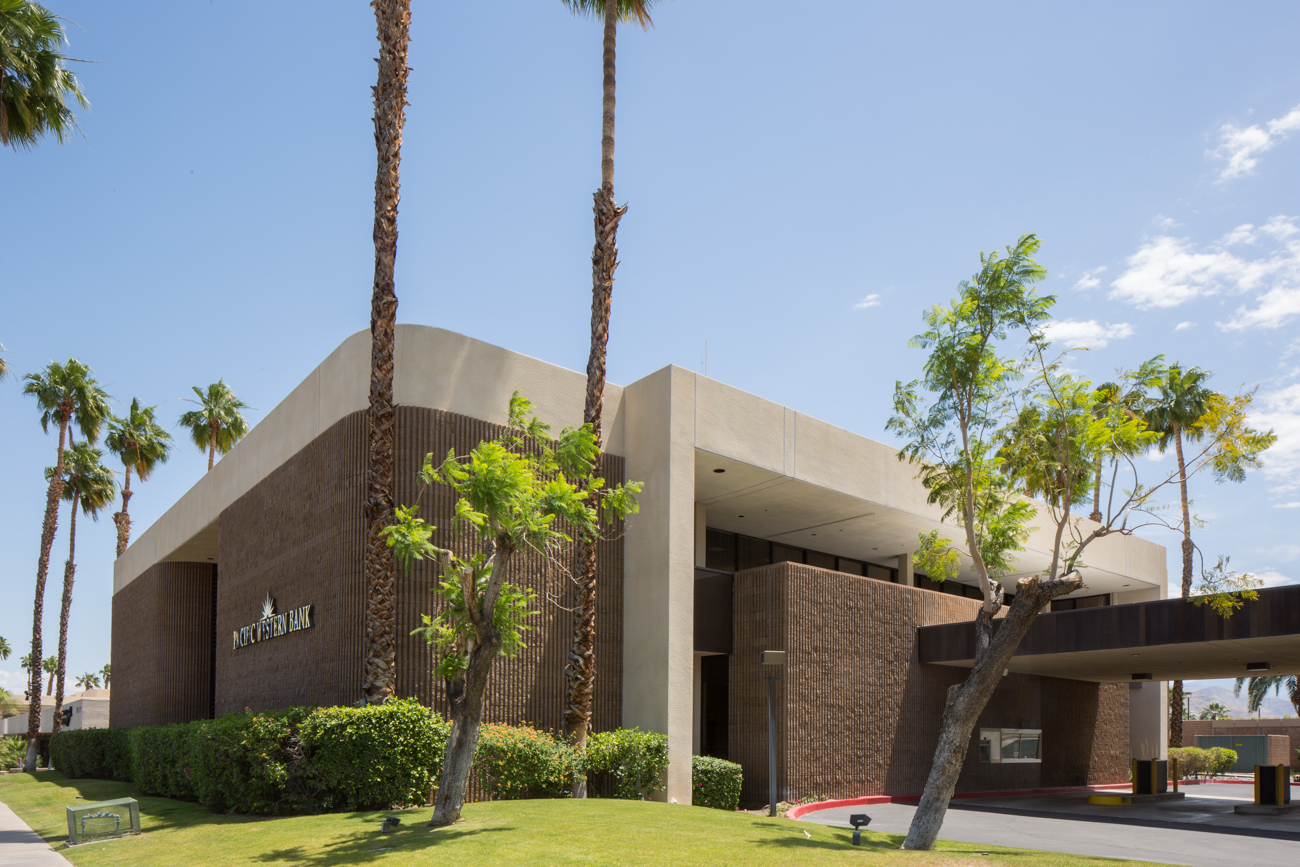 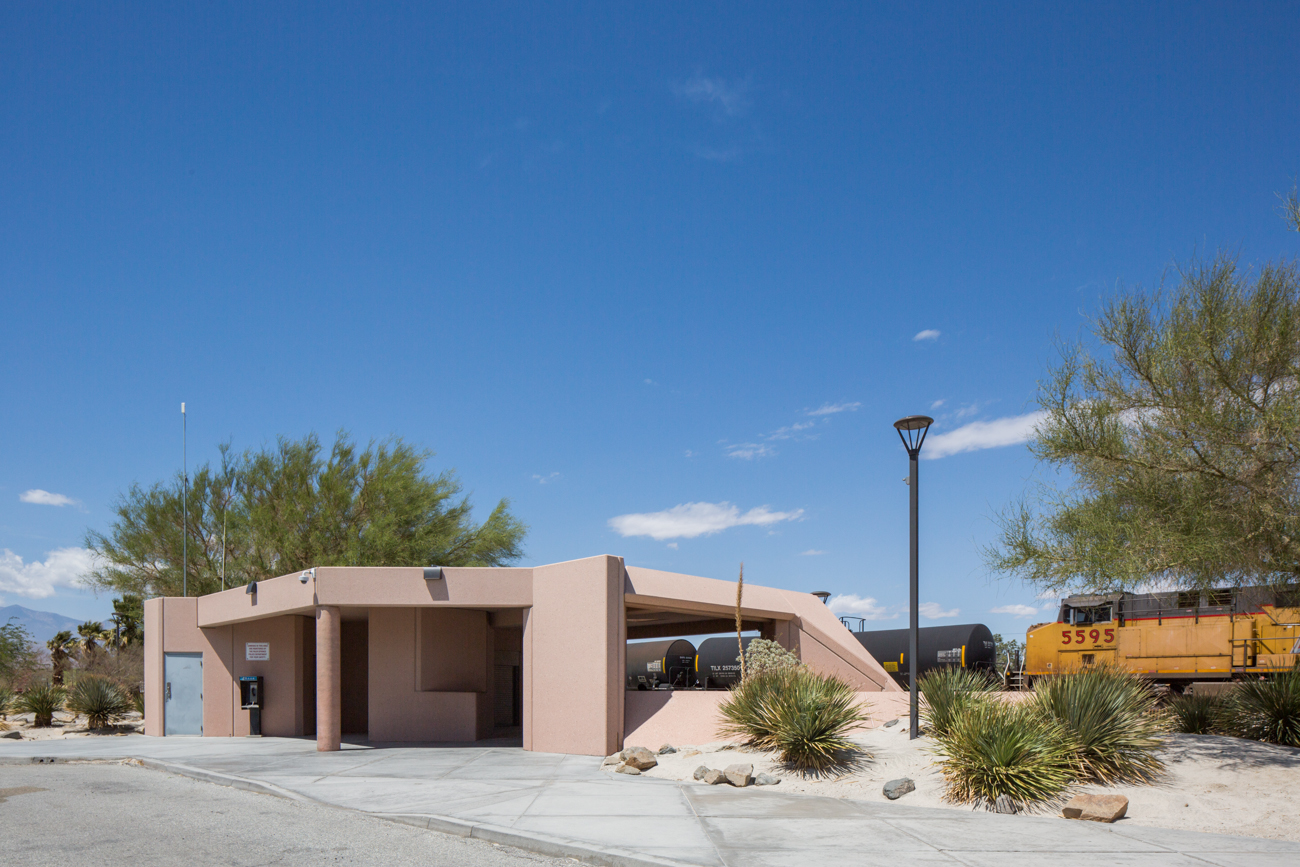 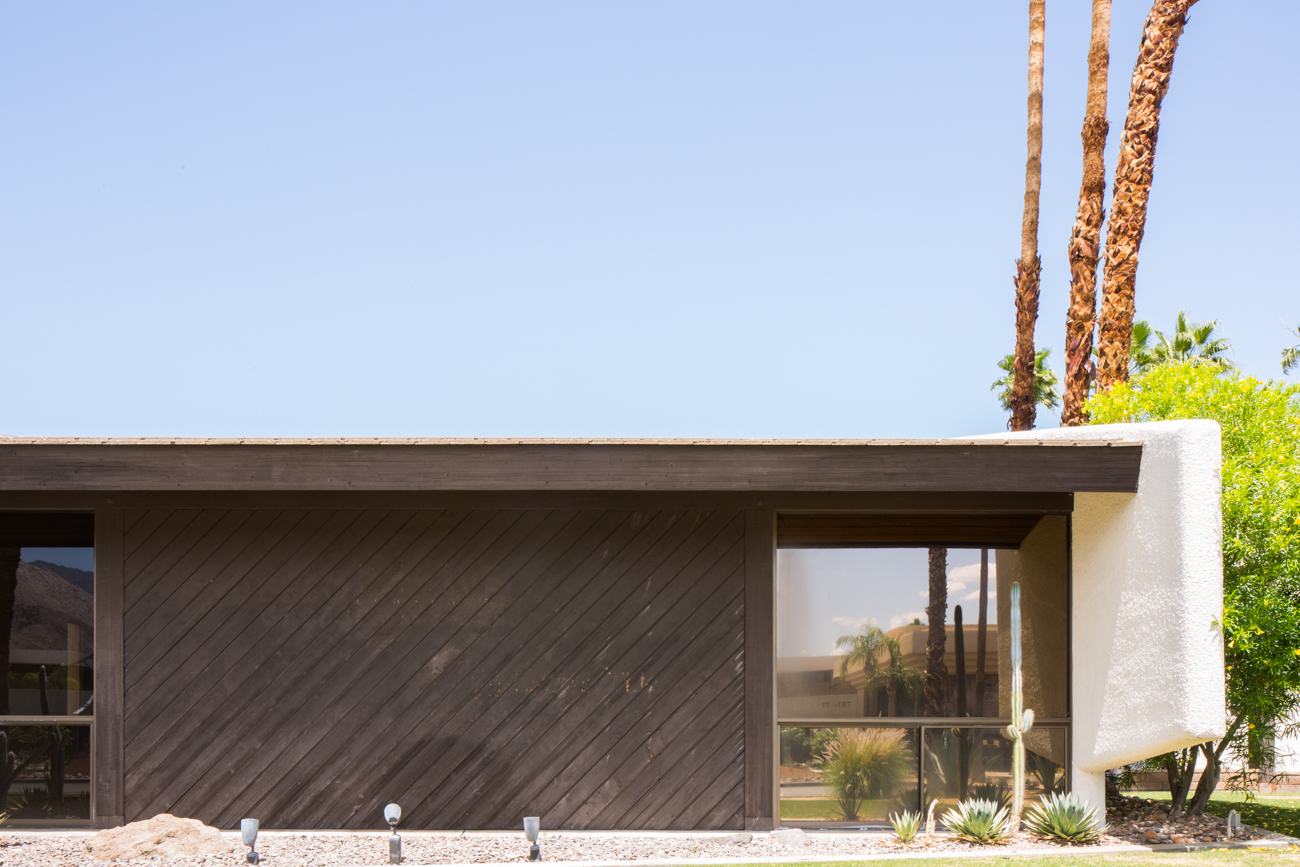 These evolutions are visible in the Palm Springs library, designed by midcentury architect William Cody and completed in 1975. Observed along with other buildings of the era, the library begins to reveal an iconic post-midcentury modern Palm Springs style. Its angled external slabs are made from untreated local earth, creating a low-slung bunker that leads into an interior full of light filtering in from a crosshatch of skylights. William Cody’s St. Theresa Church of 1968 similarly employs heavy, sculpted concrete walls that guard a light-filled, tent-like space. Architect Laszlo Sandor’s 1973 Seventh Day Adventist Church strikes an even more unapologetically brutalist profile, with immense, stacked rectangles of white concrete, deeply recessed clerestory windows, and a square tower featuring vertical slit windows similar to those in Tahquitz Plaza.

Kaptur’s commercial designs of the 1970s extend the themes he expressed in Tahquitz Plaza. One building at 1900 Tahquitz Canyon Way goes full bunker with grass-covered, diagonal concrete walls that slope to its roof, creating a building that appears to be underground. Another Kaptur-designed commercial complex uses "corduroy concrete" in heavy curves to create another take on 1970s brutalism. A more organic, residential version of this brutal concrete style is John Lautner’s Elrod House, featured in the James Bond film Diamonds Are Forever.

Architect Christopher Mills, who began designing buildings in Palm Springs in the late 1970s, took these themes to a new level, designing Andreas Plaza in 1983 as a series of stacked, stucco, geometric masonry shapes with bronzed windows that echo the mountains behind in both shape and color. Mills’s 1998 office building at 1255 Ramon Road looks like both a bunker and a spaceship, with triangular windows sunken to the ground in a concrete trapezoid shape that nearly appears to float. Dark glass windows shaded by horizontal overhangs reminiscent of Kaptur’s work repel the desert sun.

Because of economic forces, Palm Springs’ post-midcentury architectural innovation happened largely in public buildings like libraries, offices, and churches. Following the clubby Hollywood era of the 1940s and 1950s, when many iconic custom homes were built for celebrities like Frank Sinatra and Dean Martin, people from all over were drawn to the area to live the romantic desert lifestyles they had heard about. This spurred the boom in midcentury condominium developments by architects like Palmer & Krisel, who worked with the Alexander development company. By the 1970s and ‘80s, lavish custom home development had stalled, and famous architects from the midcentury period expressed their newer ideas in commercial designs.

Today’s once again booming Palm Springs economy offers a new opportunity for architects and designers to define a post-midcentury modern aesthetic. Anthony Cioffi, an industrial designer and the son of architect James Cioffi, opened his Dead or Alive bar in January with the intention of continuing to evolve Palm Springs design. Housed in a midcentury office, the bar has a distinct post-midcentury modern feel, with a molded, organically shaped bar that steps upward like a lava flow, and classic poolside-modern barstools made of taut vinyl cord.

A number of designers I spoke to notice a shift to less restrained, more post-midcentury design in Palm Springs these days. "When people were focused solely on midcentury design, I used to sell only chrome, and now everyone wants brass," Miguel Linares told me at his store, which features lucite and brass statement pieces built for celebrity homes in the 1960s, ‘70s, and ‘80s. Tim Prendergast of the design store Christopher Anthony pointed me to a heavy waterfall credenza with a granite top by postmodern designer Steve Chase as an example of what people are buying for homes that have a more brutal, post-midcentury modern look. Brutalism, as a design concept, is back in Palm Springs. As people catch on, the city famous for midcentury modernism may become known, too, for the next wave of vintage architecture to inspire today’s design.

How to Avert the Next Housing Crisis

Can a Neighborhood Become a Network?

View all stories in Longform