Visiting LA's Sixth Street Bridge in the Midst of Demolition

The enormous old bridge is taking months to demolish; take a tour of its undoing

By Bianca Barragan May 4, 2016, 2:37pm PDT
Photography by Elizabeth Daniels for Curbed LA

What's going on at the Sixth Street Viaduct is not a renovation. The Los Angeles River bridge, victim of a an unstoppable, irreversible alkali-silica reaction (nickname: concrete cancer), can't be overhauled or salvaged. It's beyond fixer-upper, it's a confirmed teardown. What's happening at the site of the bridge right now is a full-blown replacement.

Project contractors Skanska and Stacy and Witbeck have been busy. At any given moment, the old bridge, which opened in 1933, is likely being meticulously pounded into tiny pieces by excavators and breakers. When they fall to the ground, they are collected by different machines and sorted into like materials. At night, the pieces are hauled away.

A few feet away from the crumbling bridge, columns are being drilled into; perforated; made into smaller, more manageable pieces so they can be lifted by crane to a spot where they too will be pounded into tinier pieces. At the 101-Freeway-adjacent site where there's active, daily demolition, there are piles everywhere of little broken bridge bones.

Every span of the bridge they crush, there are about 100 semi-truck loads of concrete and rebar debris to haul away, says Skanska site superintendent Jeff Anderson. The top of the bridge, where a car might have taken a leisurely cruise not so long ago, has already been stripped from end to end of its asphalt and concrete.

It's very post-apocalyptic up there, with the layers of graffiti and the ripped-up road. The only signs of life are all the bird poop and the occasional pigeon bursting out of the nooks and crannies created by the weathered steel arches.

After the 101 Freeway closed for a weekend in February for the removal of the freeway-spanning portion of the viaduct, many people were surprised that more demolition hadn't been accomplished. "It’s funny," says Anderson. "Typically, we demo a bridge to build another next to it or right where it is...and it’s typically a two-night deal. You spend eight or ten hours one night, get half of it down, then the other half the following night and then that’s it. But this one is just massive in comparison." 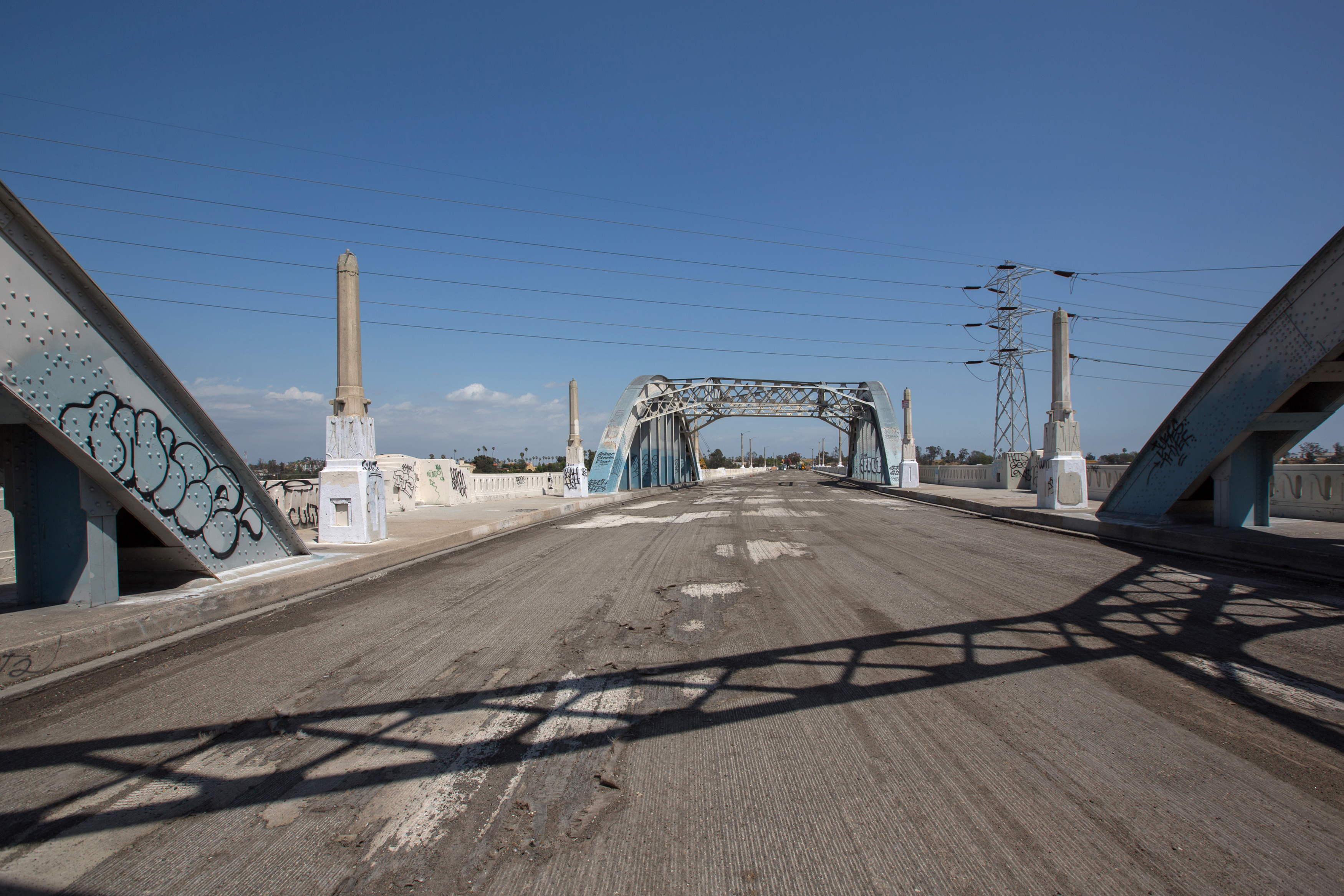 When demolition approaches the 18 train tracks that the viaduct crosses (nine tracks on each side of the river), Skanska/Stacy and Witbeck will have to coordinate with the five rail entities that use the tracks to keep the trains running; though there will be some scheduled outages, and the bulk of the work will hopefully get done then, there will also be a lot of times when they'll just have to stop work when a train comes, like in Wayne's World, when Garth and Wayne stop their street hockey game for every car that goes by.

When bridge destruction hits the river, demolition workers are praying for no rain. "If you get a small rain event the water rises like crazy, so we can’t be in there" when it rains, says Anderson. 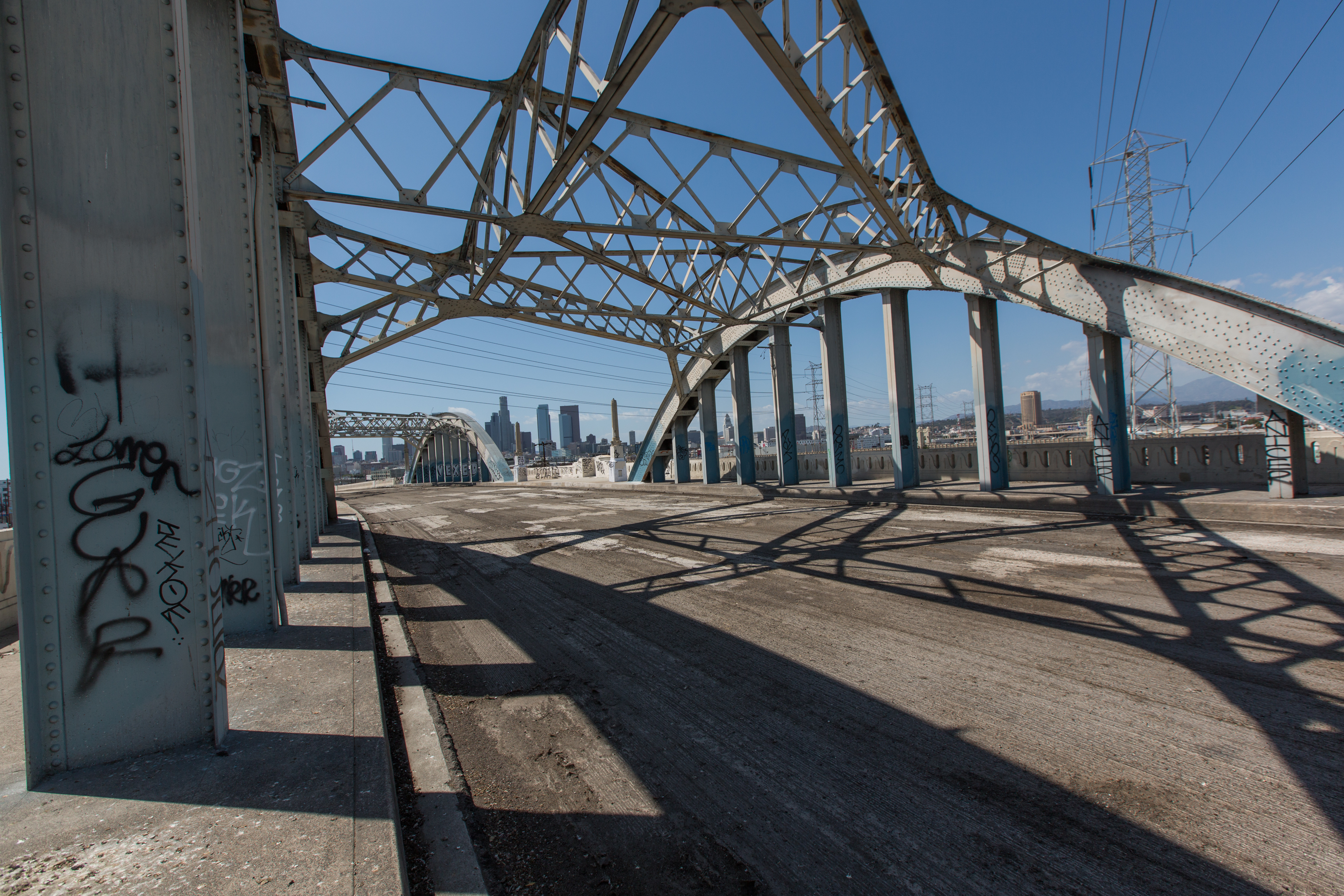 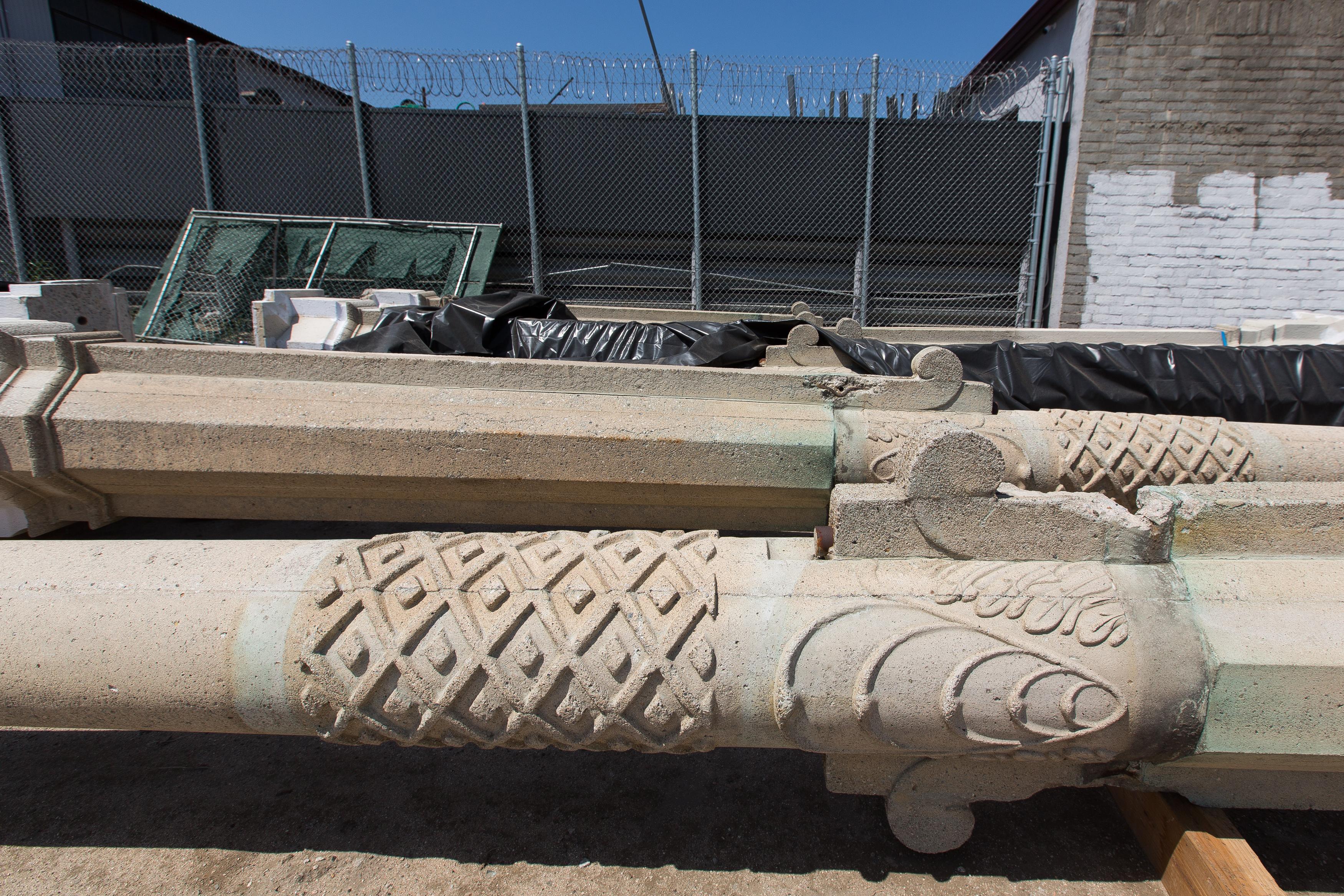 Though a lot of the bridge is being smashed into chunks, several elements have been salvaged and will go on to greener pastures. (Well, greener than where all the other construction debris is going.) Twenty-five lampposts from the bridge have been saved, their copper fittings put in storage before enterprising copper thieves could snap them up; one of the steel arches will be saved too, possibly for later inclusion in a park.

And the plaque that marked the opening of the bridge in 1933 has been saved, along with a pretty thick chunk of the bridge itself; Anderson says he didn't want to risk damaging the bronze plaque trying to separate the two.

The demolition is moving east to west; the smashing of the bridge will continue more or less in the same way as it goes down the line, until the bridge's end on the Arts District side of the river. Once enough of the old bridge is gone, construction will start on the new one. So there will be construction and destruction happening at the same time.

Anderson says Skanska's expecting to get the go-ahead in June, and building will start shortly after that. Recent estimates place the completion of the new replacement bridge at late 2019.

LACMA is being torn down right now

Construction still chugging along in LA amid pandemic