Through fashion shows at the Biltmore Hotel and her own spectacular wardrobe, socialite and designer Peggy Hamilton helped to create LA’s earliest fashion scene

In 1922, the work began. Artist Giovanni Battista Smeraldi spent seven months lying on a scaffold, like a "modern day Michelangelo," painting ceiling frescoes at the rapidly rising Biltmore Hotel in Downtown Los Angeles. It was fitting that a European artist of international renown, who had already painted decorative ceilings and murals at the Vatican and the White House, had been tasked to make this new space spectacular. City boosters planned great things for the Biltmore. Designed by Schultze & Weaver, it was to be "the host of the coast," the cultural center of Los Angeles, the public space that proved once and for all that Los Angeles was an equal to New York, Paris, and London.

The Crystal Ballroom at the Biltmore was Smeraldi’s greatest accomplishment—and personally his "most satisfying artistic endeavor." "With its colorful, intricate murals, it was the most elaborate of Smeraldi’s work inside the hotel," historian Margaret Leslie Davis writes. "Mounted in a concave, domed surface and decorated with goddesses, cupids, satyrs and other mythical figures, the finished ceiling was a single canvas of great proportion." Huge crystal chandeliers imported from Austria completed the magical scene. The overwhelming impression of the Crystal Ballroom became (and stayed) a major point of pride in Los Angeles. "The excellence of Smeraldi’s masterpiece enables the Biltmore to possess an elegance found only in the palaces and public buildings of Italy, Spain and France," Carl S. Dentzel, president of the Los Angeles Cultural Heritage Board, would say decades later.

In the fall of 1923, Los Angeles was atwitter about the upcoming opening of the Biltmore Hotel. A massive gala was planned for October 2, and the press breathlessly reported on preparations for the event. The flamboyant Peggy Hamilton, a socialite-turned-costume-designer-turned-editor of the Los Angeles Times rotogravure fashion page, believed, much like the founders of the Biltmore, that Los Angeles was "the future Paris of America." On September 30, her fashion page featured a collage of models wearing fashions superimposed over illustrations of the newly completed Biltmore:

Which slipper shall I choose for the opening ball at the Biltmore—brocaded silver in the oriental shadings—plain gold with the new strap effect—or these lovely brocaded satin—so soft in tones and exactly matching my point lace gown. Well, Wetherby-Kayser’s designs are all so fantastic…

But none of these shoes could top the ones that Peggy wore. They were satin slippers, adorned with buckles featuring her very own profile. And this was the least spectacular part of her ensemble. In a separate article on September 30, the Los Angeles Times reported:

At the Biltmore ball, which will open one of the most splendid hotels in the Southland, Miss Peggy Hamilton, designer and fashion artist, will wear a unique gown which she has christened "The Biltmore." The gown was designed by Peggy Hamilton as a complement to the Los Angeles Biltmore, and its ornamentation is an exact replica of the ceiling in the ballroom, a creation of the interior decorator John B. Smeraldi of New York.

And so the Crystal Ballroom was transformed into an avant-garde dress that looked like something out of a fantastical 18th century romance. On the night of the gala, 3,000 guests, including legends like Douglas Fairbanks, Mary Pickford, Cecil B. DeMille, and Myrna Loy, were entertained by seven orchestras, surrounded by profusions of sweet-smelling native flowers. But among all this glamour, Peggy was the belle of the ball, and her dress was reported on in minute detail:

Miss Hamilton has used Florentine satin in ivory tints; on this the ceiling motifs, which are Italian Renaissance showing French Premier influence, have been hand-painted by Miss Florence Lila Gilbert, daughter of the artist Mrs. Carrie M. Gilbert, whose Indian studies in oil are internationally known.…At the sides of the gown are distended pocket effects which represent boxes in the ballroom…The front panel of the gown is an exact reproduction of one of the ceiling sections. At the center of the bodice is a hand painted medallion, executed by Miss. Gilbert, showing the wearer’s profile against a background of Della Robbia blue….With this gown will be worn a blond wig with curls in pastel tints, and an ornament of brilliants to suggest the crystal prism chandeliers on the ceiling of the ballroom.

The dress brought national attention to Peggy, soon dubbed "dame fashion," "Peggy the poser," and the "original Biltmore girl." Peggy—a big believer in self-promotion and hyperbole—believed that the fame of the dress helped make her "the most photographed woman in the world." It also helped bring even more positive publicity to the new, already lauded Biltmore Hotel, which impressed all who beheld it. "With the Los Angeles Biltmore," Biltmore hotelier John McEntee Bowman enthused, "this great city becomes more than ever a gathering place of the smart people of the world."

And no one was "smarter" or more "in" than Peggy. In 1924, an Aviation Ball was held at the Biltmore to celebrate the crew of pilots about to take off on the first flight around the world. Peggy began to create a dress for the ball. The Los Angeles Times reported, "Miss Hamilton, who won nation-wide fame for her Biltmore gown, says this latest product of her skill will surpass that famous creation of beauty." The blue satin dress was indeed shocking—Smeraldi hand-painted tiny airplanes on it, and it was wired to resemble a globe. The morning after the ball a columnist wrote, "Peggy Hamilton of the Los Angeles Times created a sensation when she appeared in a specially created round-the-world gown." Months later, at an event in Royal Albert Hall celebrating the flyers’ triumph, Peggy told an audience, "I love to wear this dress because I can sit down on Germany."

Peggy began to hold regular teatime fashion shows in the ballrooms of the Biltmore. They became important social events, attended by the likes of movie stars Joan Crawford and Dolores del Rio. Peggy solicited many of her Hollywood and society friends, including Clara Bow, Marion Davies, and Colleen Moore as models, and often saved the grandest creation for herself. At her first show, huge crowds had to be turned away, and those lucky enough to gain entrance to the Sala De Oro were not disappointed.

The garden setting of the stage presented huge flowers, having fair girlish faces smiling approval to those who promenaded along the quaint posy bordered walks leading toward the platforms whereon appeared the beautiful models clad in the latest modes. Cleverly arranged so that all might obtain a view, the setting enhanced the exhibition which was given further emphasis by information traced upon the banners of dainty pages at either side of the stage…Special music, several songs composed for the occasion, and a particularly well-thought-out adaptation of costumes to the style of each wearer…made for fashion education as well as for entertainment.

The show concluded with a promenade made by a mock bridal party wearing their wedding finery with "great dignity." 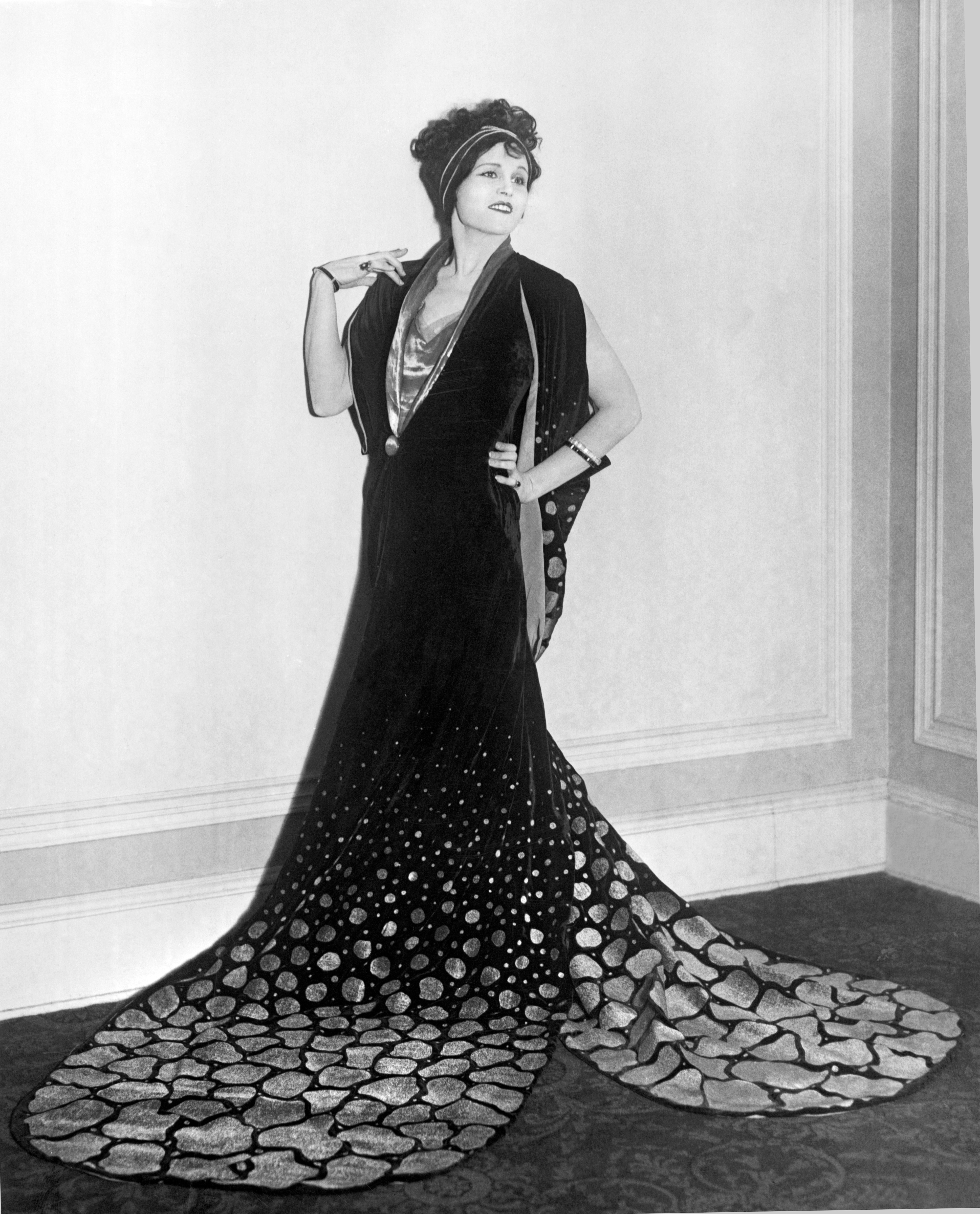 But these seemingly frivolous events had a civic purpose. Peggy used them to promote local Los Angeles stores and designers. Through her efforts, local designers began to take pride in their LA roots, and stopped disingenuously putting "made in New York" on their labels.

Throughout the 1920s, Peggy acted as the hostess at the Biltmore, welcoming garment and jewelry conventions, trade shows and visiting capitalists. She would often wear her iconic Biltmore gown at the hotel, much to the delight of fellow guests, including child actress Lassie Lou Ahern, who would often attend events at the hotel with her mother. "She was very blond and looked startlingly lovely in that dress," Ahern recalled. "I remember that I wanted to touch the dress. I wanted to stick my hands in those pockets. I didn't, of course. I was always on my best behavior at the Biltmore."

Where Peggy went, the Biltmore gown followed. In 1927, Peggy took her fashion show on the road to the Biltmore Hotel in New York City. Here, she staged a fashion show for the ages, featuring motion picture costumes from all the major studios, modeled by girls she hand-picked for their resemblance to silent screen stars:

In an address preceding the show, Miss Hamilton made the prediction that Hollywood will eventually become one of the three fashion centers of the world, through artistry of the designer’s, influence of film stars, and the medium of the screen. The West Coast, she said, will in time become the arbiter of the world’s styles just as Paris has been for centuries…Miss Hamilton opened the show wearing her own creation, the Biltmore gown, which presents in hand painting a replica of the ballroom ceiling of the Los Angeles Biltmore which was decorated by Smeraldi. She also had the closing scene, appearing as "the bride of 1925," where she introduced the new Spanish bridal gown worn by Alma Rubens in a recent Fox production. Just before the final curtain she stepped forward and asked the society men and women, film stars and others who constituted the audience, whether having witnessed the pageant they did not really believe now that Hollywood was destined to become the fashion center of the world. Her answer was a storm of applause.

Peggy’s power reached its height during the 1932 Olympics, where she served as the official hostess of Los Angeles. Wearing a diaphanous Grecian-style dress, she was crowned Queen Olympias in the Biltmore’s Sala De Oro, with Loretta Young and Thelma Todd supporting her as "princesses." She participated in the opening ceremony at the Los Angeles Memorial Coliseum. She also hosted her own radio programs and continued to edit the fashion page of the Times, which featured Greta Garbo, Gloria Swanson, and (of course) Peggy herself, modeling the latest fashion by local designers like Adrian and Travis Banton.

But the deepening Depression would eventually snuff out Peggy and the Biltmore’s flame. She stopped her fashion page in 1934 and followed a new husband to Nevada. She would be married several times, gain and lose fortunes, move back to Los Angeles, and claim to have been in "nine major accidents." She died in 1984.

The Biltmore’s glamour would fade as LA society moved away from Downtown. But Peggy proved to be prophetic about her beloved city. Los Angeles is indeed a magnet for "the smart set" and movie stars and LA-based designers do indeed set fashion trends around the world. Peggy, never one to set her sights low, told a reporter in the 1970s, "I admired Marie Antoinette because she moved through her affluence and power to make France recognize its own designers. So I decided I would just take a little glamour away from Paris and New York…"

Today, the Biltmore’s Crystal Ballroom has been beautifully restored, with Smeraldi’s designs as vibrant and lovely as ever. Fittingly, Peggy’s Biltmore gown now resides in a glass case across the hall, elegantly displayed but often overlooked. "They treated me like a queen here," Peggy recalled in her old age while visiting the Biltmore. "The orchestra always played ‘Peg o’ My Heart’ when I came in."

How to Avert the Next Housing Crisis

View all stories in Longform