What's an observation deck without a "thrill factor"?

A handful of the top floors at Downtown LA's US Bank Tower are undergoing a $50-million renovation that will leave the West Coast's tallest tower (for now) with a new, two-floor observation deck with 360-degree views, but apparently that isn't exciting enough.

Bank Tower owners OUE Limited announced today a new addition to the Skyspace observation deck tourist attraction that's guaranteed to give it that "thrill factor": a 36-foot long glass slide that will allow brave souls to slide from the 70th floor to the 69th along the outside of the building.

Called the Skyslide, the chute will be made of clear glass four inches thick, sit about 1,000 feet above the ground, and totally one-up other observation decks that just have that scary all-glass platform that creates the illusion of standing on air (like the one at Chicago's Willis Tower).

A rendering shows a totally calm person casually moving through the slide with arms overhead like this is merely Splash Mountain and not an $8 near-death experience. ($8 Skyslide passes will be sold separately from the $25 Skyspace ticket.) UPDATE 3/2: Gensler designed the Skyspace observation deck and associated areas (lobby, elevator transfer floor), but not the Skyslide, which was designed by M.Ludvik & Co.

When complete, Skyspace will have a lobby on the second floor of the US Bank Tower, and occupy various spaces on the 54th, 69th, and 70th floors of the building. (The 71st floor floor will hold a brand new restaurant and the 72nd floor will remain office space.) Previous reports on the US Bank Tower's Skyspace project anticipated a mid-2016 opening, so there are still a few months to muster the courage to ride this thing. 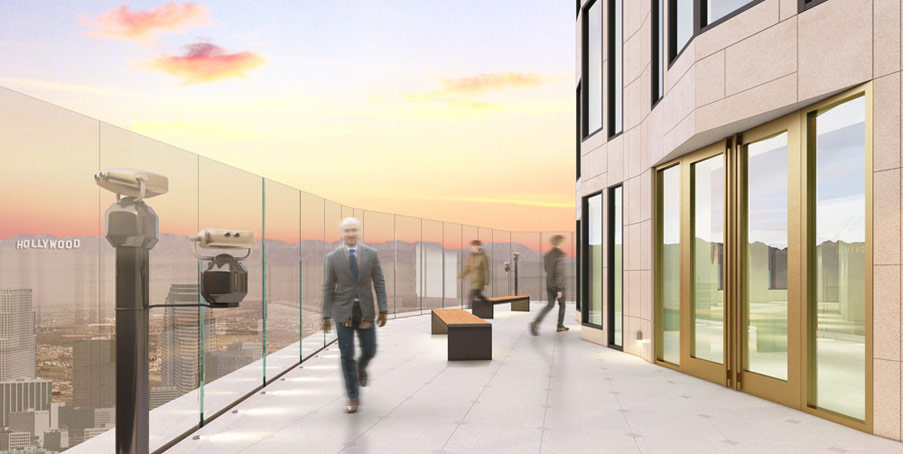 Next Up In Los Angeles Development