One photographer painstakingly reshot old photos of the once-volatile waterway

The Los Angeles River is on the verge of a new era. In the few years since the flood control channel was reclassified as a “navigable waterway,” the region has re-embraced its oddball amalgam of concrete and nature, which winds roughly 51 miles from the San Fernando Valley out to the ocean in Long Beach.

A $1-billion-plus plan to restore 11 miles north of Downtown LA is (slowly) working its way through federal approvals.

Famed architect Frank Gehry is working with Los Angeles County officials and numerous nonprofits and stakeholder groups to create a comprehensive plan for the whole river. The river was one of the selling points in the city’s winning bid for the 2028 Olympics. Developers are still clamoring to build along the river’s banks.

The last time the LA River was reborn it was the late 1930s, and it had been drowning the young city periodically since its birth. At some points, the river was just a trickle; in other parts, it was uncontrollably wild, and flooded frequently and devastatingly.

After a terrible flood in March 1938, the U.S. Army Corps of Engineers began work to lower the riverbed, widen the channel, and choke the whole thing in “a continuous trapezoidal concrete channel to carry the river from Elysian Park to Long Beach,” as described in The Los Angeles River: Its Life, Death, and Possible Rebirth.

Gehry thinks the LA River can be great again with its concrete still intact; the Army Corps aims to remove at least some of it.

In 2013, just as the LA River’s moment was beginning, we looked at 25 photos from the LA Public Library’s collection showing just how unrecognizable it was before it was paved. Peter Bennett, who runs the Los Angeles River Photos blog, found where nine of those photos were taken, and, using his iPad to match up with the originals, took the same shots of the river as it is in the 21st century. In an email, Bennett writes:

The idea was to get as close to the original spot the older photos were taken, and try to match up the lens and framing with the original… There was a sense of time travel as I viewed the landscape as it is today and... as it was back in the ’30s. The visual contrast was quite striking, and the changes apparent in the 75 years or so since the photos were taken was at times quite dramatic.

Below, the two versions are matched together, along with Bennett’s notes, so you can take the trip yourself. 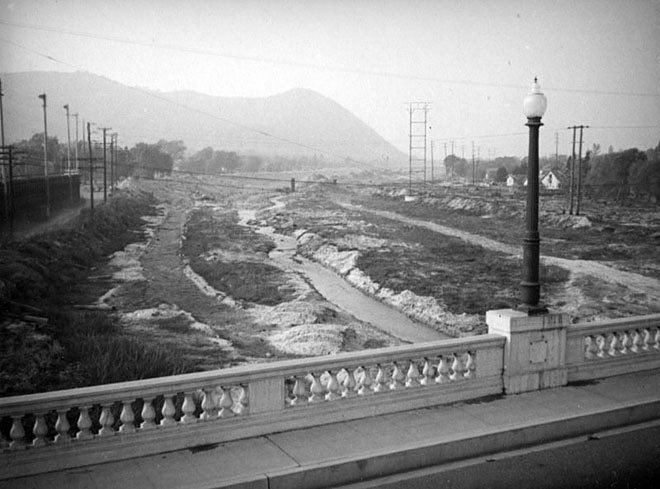 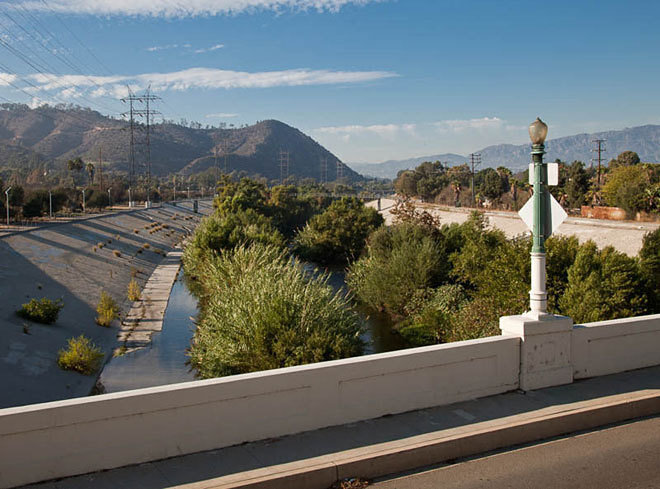 “The first photo I took was from the Glendale Hyperion Bridge. It was probably one of the easiest to match up as the lamppost is still there, and I felt like I was standing on the exact spot where the photographer of the original photograph stood when they took it back in 1937.” 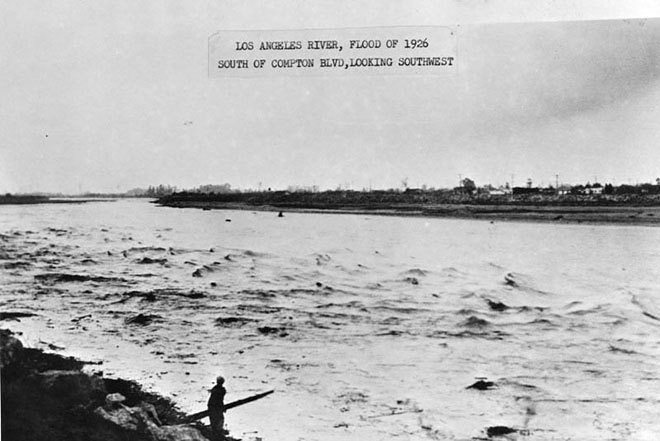 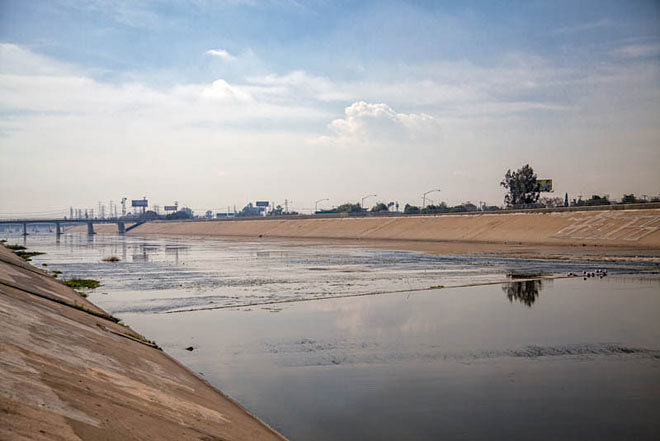 “The shot south of Compton Boulevard had no real landmarks, so I took it just south of the Compton Avenue Bridge. In the 1926 photo, you can see the river veer off to the right a bit, but I cannot say if that was a result of the flooding heading inland or if it was taken farther Downstream, where the river does veer to the right. In either case, you get a good idea of the contrast.” 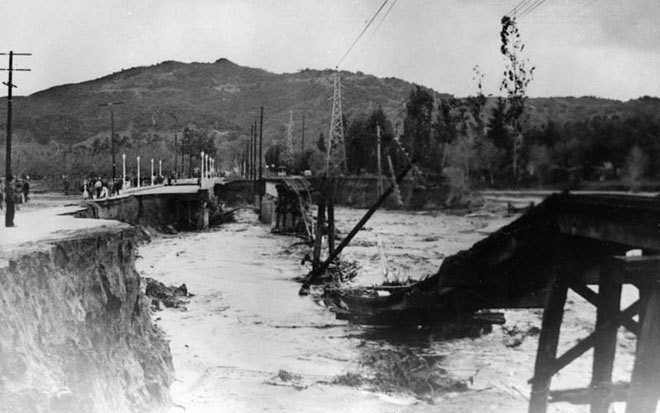 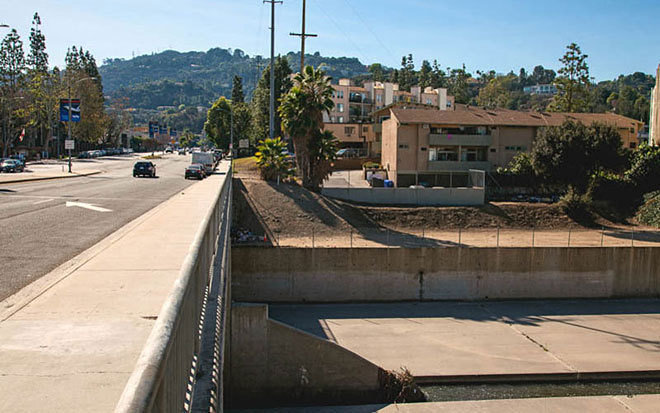 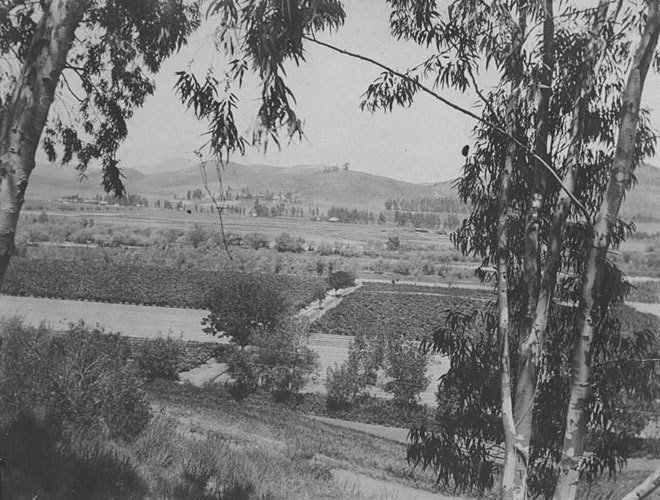 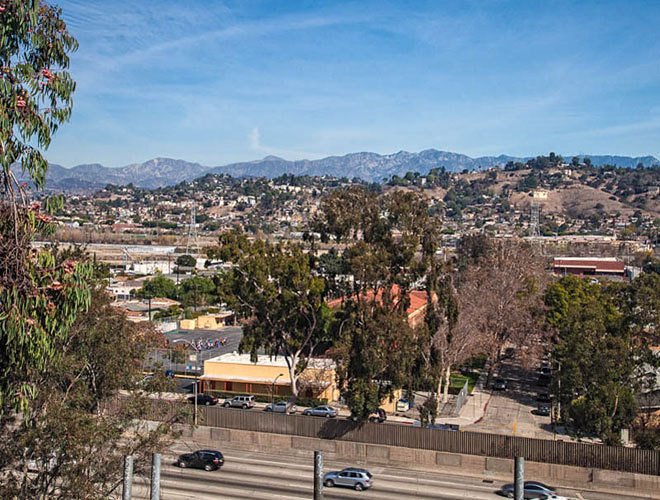 (Left) Photo taken from Elysian Park, looking toward Cypress and Glassell Parks, circa 1898. (Right) In 2015.

“The most difficult photo to match up was the one from Elysian Park toward Cypress/Glassell. It took a couple of trips to find the location from where this photo was taken, but I finally spotted a blocked off fire road and walked down it a ways and found the view between some old eucalyptus trees...

I could not get to the exact spot, because it was simply too steep now, but the contrast between the 1898 rural farmland setting and the urban landscape it is now is quite stunning. The small country road in the foreground has been replaced by the multilaned 5 Freeway, and the crops just behind them are now a schoolyard in the densely packed Elysian Valley (Frogtown) community.” 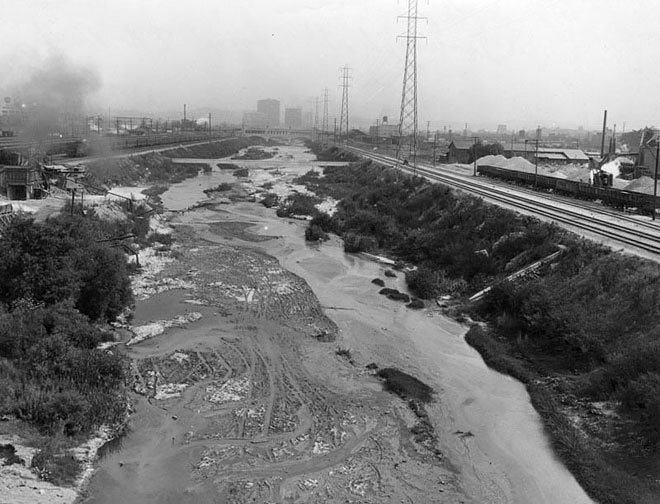 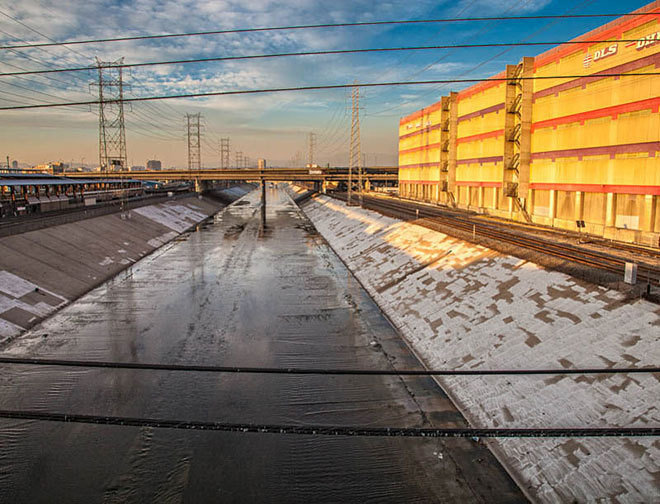 “The photos of the Downtown bridges are interesting as you can really contrast the original unpaved river with the paved version that we are familiar with today. The photo [previously] labeled looking north from the Seventh Street Viaduct was actually taken from the Olympic Boulevard Viaduct, and while you can see the Seventh Street Viaduct in the distance. Today that view is blocked by the 10 Freeway." 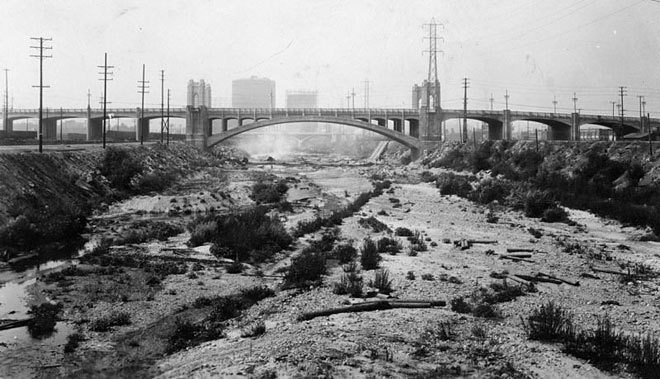 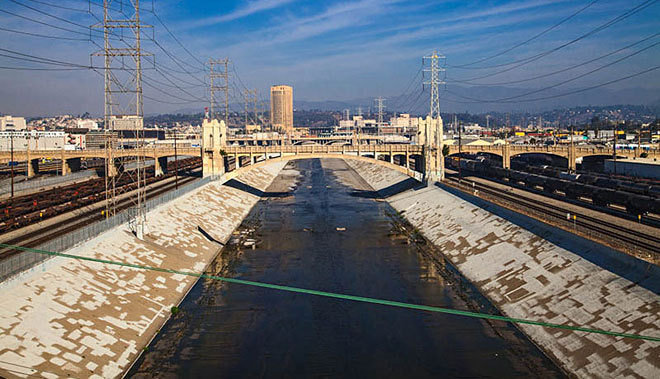 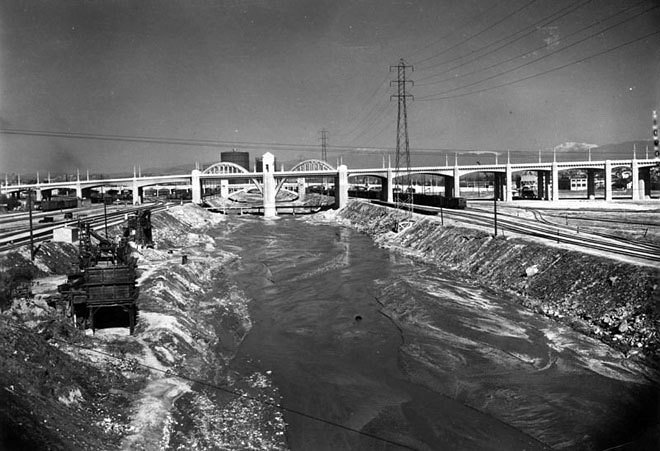 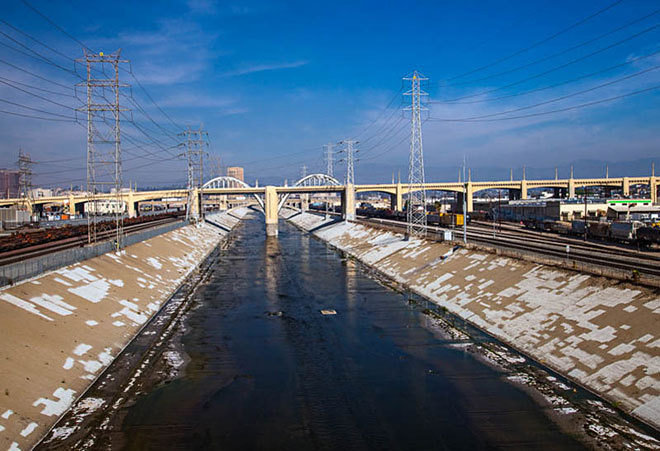 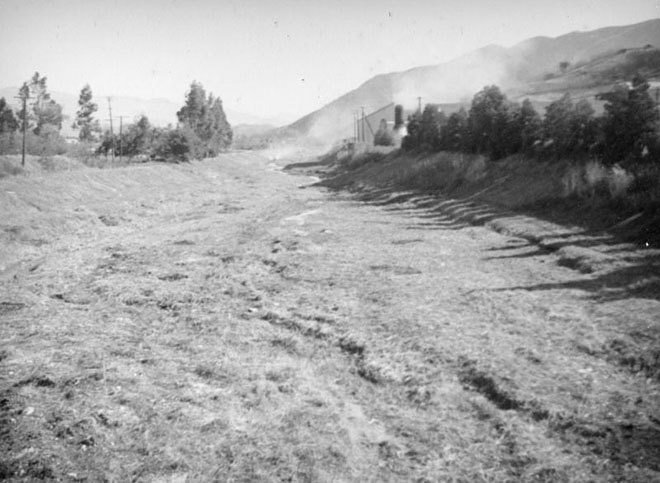 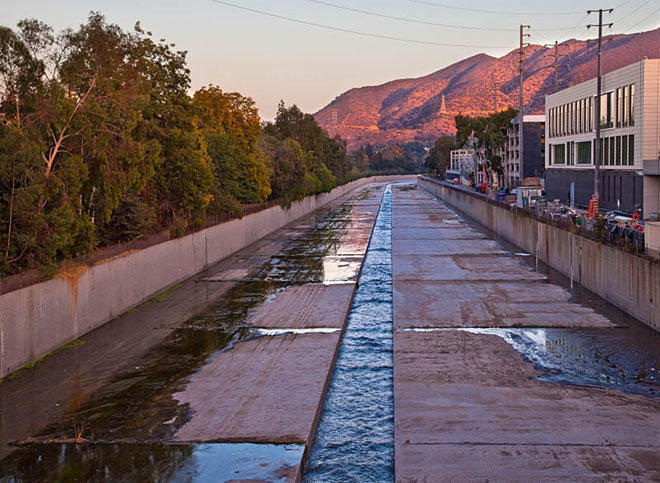 “The photo of the dry section of Studio City was taken from Lankershim Boulevard, and you can see the edge of Universal Studios on the right.” 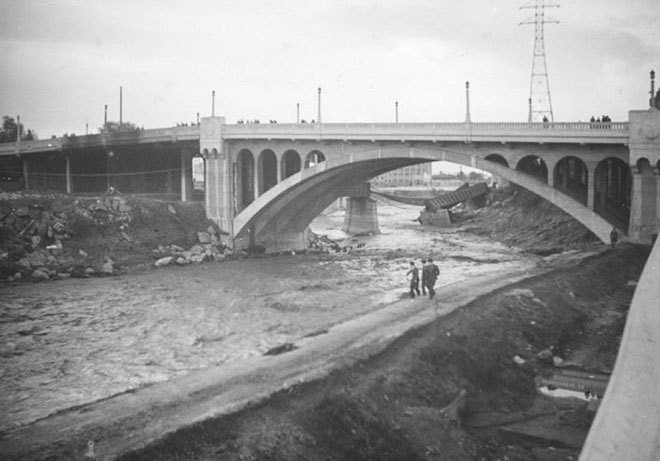 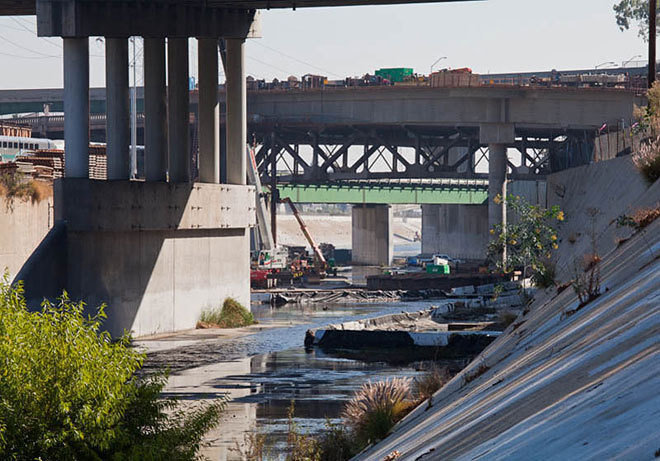 “The Dayton Avenue bridge hardly exists in its original form. It has become a mishmash of bridges that have been added to over the years. But if you look closely at the recent photo, in the upper left corner, you can still see some of the balustrades of the original railing of the bridge that still remain. The Riverside-Figueroa Bridge, which is what it is currently called, is being replaced again by a new bridge, and it is unclear whether anything from the original bridges will remain after the construction.” [Update: The Riverside-Figueroa bridge’s replacement opened in January 2017.]

Next Up In History